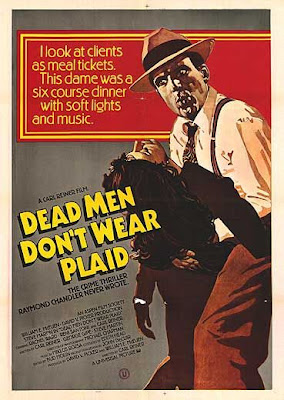 Don't consider today's film to be a noir classic. Obviously it's not. Made in by director/writer Carl Reiner with writer/star Steve Martin, Dead Men Don't Wear Plaid is more of a goofball love letter to the genre. For me, it's a Where's Waldo type of quiz.

I first saw this movie on HBO when I was 10 or 11.  I'm can't remember exactly how or why I ended up watching it.  It was black and white and I wasn't terribly familiar with Martin's genius.  I had seen him in The Jerk and All of Me, so maybe the curiosity got the best of me, or most likely, it was the sex jokes..  Regardless, at that time, I had no idea that much of the footage was from much older films.  I did recognize Bogart, but only because of Warner Brothers cartoons.

So I considered today's viewing a test.  Would I know these films now?

For those keeping score at home, I nailed the following films that appear:

After checking out Imdb.com, I'm sad to say there are another eight films whose clips I did not recognize, which gives me 53%, not even a passing grade.  To be fair, I still haven't seen The Bribe, or Johnny Eager, but I lose points for missing the White Heat clips.  No excuse on that one.

As for the movie itself, I'm not sure if I'd label it a success or not.  Martin and Reiner are comic legends, so it's a bit of a disappointment this film isn't funnier.  Sure, the script had to fall into the parameters of the clips they had chosen to use, so it had to be difficult to write jokes for the situations presented, but they still fell flat.  Any fun I had during the film was playing spot the movie, not laughing at awkward boob jokes.

I'm glad I rewatched it, but it will be a while before it happens again.

However, rewatching it did give me an excuse to find that amazing poster, which as usual, is better than the DVD cover.  When will they learn?