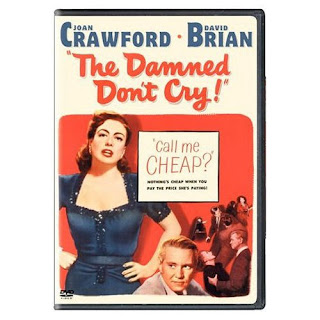 After a few days of the gents running the show, I figured it was time to spotlight a femme fatale, and I can't think of a better place to start than with Joan Crawford in The Damned Don't Cry.

A body is found in the desert, and it happens to be a dead mobster, Nick Prenta (Steve Cochran).  As the police investigate his murder, they realize it is somehow connected to a missing socialite, Lorna Hansen Forbes (Joan Crawford).  The deeper the police dig into the crime,  the more they discover that Forbes (if that is indeed her real name..dum dum dum!) is very much a woman without a past.

It seems Lorna is actually Ethel Whitehead, a poor woman with a life that she hated.  She wanted more and was willing to do anything to move up in life.

I believe Ethel Whitehead became the woman that all of of our mothers warned us about.

But not first.  After the death of her son Tommy, she starts small, abandoning her husband, whom she blames for his death. At this point in the film she's rather brave and sympathetic.  Leaving her husband, and starting over was a tough decision.  Any comfort she had is tossed away, the hope of a better life worth more than security.

She inches her way up the ladder by selling cigars in an office lobby.  Flirting with a dress maker in the building and soon gets her a job modeling dresses, which seems a little more glamorous, but is actually quite demeaning.  The men are as lustful and grabby, and don't exactly treat her as anything for than an object of pleasure, which technically, I guess she is.  As her friend says, "What else do we have to sell but a face and a figure?"  Soon, she is an escort and double crossing her friend/partner, becoming a little bit tougher.

Then comes the romance with the accountant.  He deals with taxes, and while it's not the most exciting of jobs, Ethel sees a chance to move out of the escort/hustling business.  She works her charms on the poor schlub, realizing he makes no money, but his accounting skills can be used elsewhere.  He ends up helping the owner of a fancy pants restaurant, and soon has his business, mostly thanks to her prodding.  She pushes him further into other jobs, following along behind him, meeting some rather unsavory people.

Then she starts to get a little scary.  Before long, she's in deeper than she could have ever imagined.

Crawford was perfect for this role.  Her harsh beauty, with those focused eyes and sharp features and tongue, creates a woman who is strong and smart enough to seduce, use, and abuse any man she chooses, be they accountant or gangster.  She recognizes opportunity quickly, and always seems to cash in.  She walks a tightrope the entire film, holding on to that initial sympathy we feel for her, and slowly becoming someone we shouldn't like, but still can't say no to.  You know the type of girl.  It's easy to see why every man falls for her, despite all common sense saying otherwise.  She might have won the Oscar for Mildred Pierce, but she is just as good in this.

Look for her in other film noir classics such as Possessed and Sudden Fear.