A Month of Noir Day 1 - The Asphalt Jungle 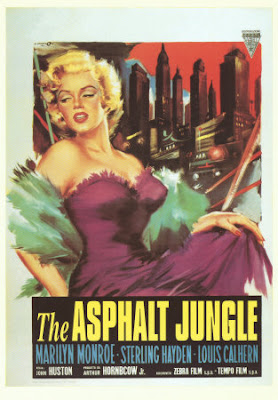 "One way or another, we all work for our vice."

John Huston is one of the greatest directors ever to look through a lens, so it's no surprise that his film, The Asphalt Jungle, looks absolutely beautiful. From it's opening shots of Dix Handley (Sterling Hayden) walking through the city streets avoiding the police, to the bank heist, to the individual getaways, each shot is a master class in lighting and framing. It's not surprise the Director of Photography, Harold Rosson, was nominated for an Oscar. His work here is exemplary, a shining example of what a noir should look like.

The camera work is not all that can be enjoyed, as the acting is superb. Hayden plays Dix, a hayseed from Kentucky, having himself a hell of a time in the city. He's a small time Hoodlum, with a bad gambling problem. His bets never seem to work out for the best, but to this point he's managed to stay afloat. Just one good win will give him the cash to go back home to his beloved farm.

And he's not alone in the city. Doll (Jean Hagen) has her eyes on him, and she'd like nothing more than their friendship to move forward. And local diner owner Gus, a man with a bad back and a chip on his shoulder, is a good friend to him. On his suggestion, Dix is brought in on a heist that could give him the capitol he needs.

Recently released from prison, Doc Riedenschneider has a plan to rob half a million in jewels. With the help of a Boxman, a Driver, and a Hooligan, they can walk in and out with the score of a lifetime.

There is just one problem, and he happens to be my favorite character in the film. Alonzo Emmerich is a seemingly well to do lawyer, but his life isn't all he's hoped for. He's got a sick wife who he can barely stand to spend time with, and a mistress (Marilyn Monroe) who is bleeding his cash dry. When the Doc and his friend Cobby come to him for the seed money, he assures them he's good for it. But all the while, he's planning on a double cross.

And while the caper does indeed work, it's the aftermath where this film starts to shine. Everything falls apart, and it wouldn't surprise me if this film was a direct influence on Reservoir Dogs.

It's an excellent film, and a great kickoff to Noir Month.