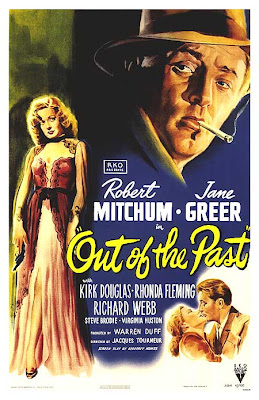 There are numerous reasons I consider Out of the Past to be the greatest film noir of all time.  So many, that I broke my month long rule of only watching films I'd never previously seen.  How could I watch a month of noir and not rewatch the film that sets the standard for excellence.

The first reason of many is the high standard of acting throughout.

Robert Mitchum, yet again, is the perfect protagonist for a dark and seedy film.  While many actors would show the stress of the situations they encounter on their face, flop sweat, facial ticks, nervous smiles, Mitchum just shrugs all that off.  It's just another day whether or not some guy wants him dead.  Gold standard for cool.

But he's not the only one.  Jane Greer is arguably THE femme fatale.  Other actresses, they can do seductive, they can do mean, they can do innocent, but they might not be able to do all three.  Greer absolutely kills (literally) each aspect of the trinity, then adds manipulative, compassion and about forty other emotions, each convincingly.  It's easy to see why, other than her obvious beauty, Mitchum's private investigator falls for her and forgets everything just to be with her.

Besides the two leads there are stellar turns from Kirk Douglas as a slick gangster, Paul Valentine as his right hand man, and Rhonda Fleming as the woman who has Mitchum's heart now.

The second reason is the writing.  Adapted by Geoffrey Holmes from his book Build My Gallows High,  each line has purpose, nothing is wasted.  The film is structured in such a way that even overused devices such as flashbacks and voice-over enhance the film instead of hindering.  And the classic lines!  When faced with an uncertain future and problems that would crush an ordinary man, Mitchum just looks at Greer, gets ready to kiss her and utters the immortal, "Baby, I don't care."

I'd be remiss if I didn't mention the amazing direction from Jacques Tourneur and the cinematography of Nicholas Musuraca.  This is a beautiful film, with the necessary dark corners and spotlighted faces.  The locations, from Acapulco to small town outside of Reno to the mean city streets.

But the absolute reason this is the best film noir ever is the inclusion of The Kid (Dickie Moore).  He's the first person we meet at the beginning of the film, and the last person to walk off screen at the end.  So why is he so special?

In my opinion, most good film noirs all have one thing in common, people have secrets.  They will kill for them, they will hide for them, they will do just about anything to hold onto the one thing they can control.  And more often than not, they can't keep them.  But The Kid, he can.  See, he's a deaf mute, and he's also the one friend Robert Mitchum really has.  He's an important character, not just the stock guy who gets in the way.  Without him, the film would be missing something.

I feel like I'm going over this much too quickly, but honestly, I could fill a month worth of blogs on this film alone.  I'm hoping that if you've already seen the movie, you know what I'm talking about,  And if you haven't, I didn't want to spoil anything.  Regardless, go watch the movie again, and write emails and letters to Criterion.  I want a super special edition of this movie.