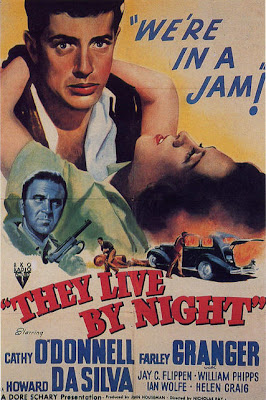 "In a way I'm a thief just the same as you are.  But I won't sell you hope when there aint any."

Those words, uttered by a truck stop marrying man, $30 for the deluxe package, $20 for the regular, come towards the end of Nicholas Ray's early film They Live By Night.  It's a great quote, and sadly, prophetic about my feelings regarding the film.

I really wanted this movie to be better.

It's my own fault.  When I think of lovers on the run, my mind goes to the classics, Terrance Malick's Badlands, Arthur Penn's Bonnie and Clyde, even Oliver Stone's Natural Born Killers.  Desperate couples, barely avoiding capture, spending what time they have enveloped in each other, not caring for the rest of the world.  Unfortunately, most of this film avoids all of that.

Bowie (Farley Granger) meets Keechie (Cathy O'Donnell) shortly after a prison escape.  Along with his partners T-Dub and Chickamaw, an injured Bowie holes up at Chickamaw's brothers house, and his niece, Keechie sees to the men.  The attraction between these two naive kids is evident right from the start, and after one more job, the two are completely in love and heading off on their own, leaving their past lives behind them.

But you know that old saying about the past not being through with you, it's apt here.  Soon the exploits of the Bowie the Kid gang are all over the papers and radio, despite the fact that Bowie was the low man on the totem pole.  So Bowie and Keechie get married and go to some cabins she visited as a child.  As a hideout it's good.  They make themselves a little life in it's seclusion, the only problem being that Chickamaw knows about the cabin as well.

Chickamaw and T-Dub have blown through their money, so they need another job.  Despite Keechie's protest, Bowie tags along, his debt to them helping him escape still unpaid.  Everything goes wrong, and T-Dub takes a dirt nap.  Chick and Bowie escape, but Bowie has had enough and ditches his uncle-in-law on the side of the road.

They run from the cabin and travel across the state, living it up as best they can.  It could have gone well, only the radio has reported that Chickamaw is dead, and Bowie is becoming more and more recognizable.  One would think when wanted by the law, it would be best not to go out to dinner, or for that matter, use each others names in public.  After a minor scrape, a man recognized Bowie and takes his gun.  But instead of calling the cops for a reward, he simply lets him go.

By this point, I'd given up all hope on the film.

I realize, from both the sets and the actors used, that this film was made on a low budget.  I was not expecting to see grand heists or shootouts, but even a bit would have been good.  These two have been on the run from the law for most of the film, yet there is zero tension in their plight.  We don't feel the law pushing down on them one bit, so their flight seems inconsequential.  Had they been smart and just disappeared into oblivion with their stash at the beginning, they would have gotten away clean.

The one thing that works for this film are the characters are done in by their own choices, not the skill of the pursuing detectives, but it's not enough.  It feels slight.