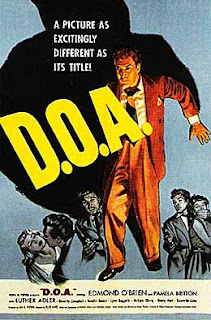 I try to always include a trailer for the films I review, mostly because I'm a trailer junkie.  Being late to the theater means missing the best part of going to the movies, so I'm often there twenty minutes early, anxiously awaiting for those lights to go down.  Oddly enough, I couldn't find a trailer for D.O.A. that I could embed.  Normally I'd consider this a problem, but today, it's not so bad, because I was able to find a clip of the films opening ten minutes, which if you haven't seen the film should convince you far better than any words I write. Sp before I start rambling on, take the time to watch the excellent tracking shots of  Edmund O'Brien as he walks through the police station to the homicide division. From there he presents one of the best "hooks" ever to open a film.

"I want to report a murder."
"Sit down.  Where was this murder committed?"
"San Francisco, last night."
"Who was murdered?"
"I was."

Since this movie, that type of scenario has been used numerous times, and of course, it's novelty has worn a bit thin.  But had I been a patron of the moving pictures back in 1950, that would have put my knickers in a twist.  Immediately hooks you into the film.  And just think, without this film, Jason Statham would have never given the world the joys that are Crank and Crank 2.

But once you get past the clever plot device of a man trying to solve his own murder, you still have to have a good film.

Frank Bigelow goes to San Francisco for a weeks worth of fun before returning to his accounting business and his fiance Paula.  She's a bit miffed at him for leaving, but decides they just might need the week alone before settling down.

While in San Francisco, Frank goes out on the town with a group of businessmen.  At an excellent jazz club, Franks drink gets swapped out for another, and by morning he's sick.  A doctor's test reveals that he swallowed a luminous toxin for which...THERE IS NO ANTIDOTE!

Instead of accepting his own death, Frank decides to find his killer, following each and every lead he can before his time runs out.

D.O.A. is by necessity, a fast moving picture.  People talk fast, they move fast, and they act fast.  The film cruises along at this pace, and is better for it.  We can feel Frank's desperation, knowing that unless two doctors were wrong, he will be dead by the films end.  Will we find out who killed him?

As the film progressed, I realized I didn't care.  I was just happy to be along for the ride.  Along with strong performances by Edmond O'Brien (Frank) and Pamela Britton (Paula), the film is paced well by director Rudolph Mate.  The only issue I had about the film was an annoying as hell slide whistle noise that happened every time Frank saw a pretty lady in the hotel.  It's a small complaint, but damn, it felt like an effect from a Three Stooges short.

D.O.A. is a staple of film noir for a reason.  It's got an excellent cast, great atmosphere, and a pace that doesn't let you go until the final moments of the film.  It is truly worthy of it's hook.