A Month of Noir Day 9 - I Wake Up Screaming 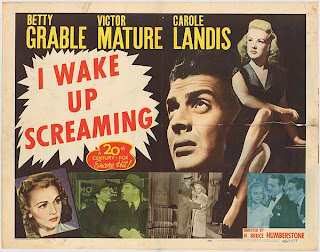 Let's get the important stuff out of the way first. Yes, we do get a pretty good look at those famous Betty Grable legs, but honestly, just look at the poster to the left if that's what you're after. Better shot than the mostly below the knee action you get watching the film. Forgive me if I don't get too excited. I hit puberty during the gratuitous nudity 80's, but I can appreciate what a shot of her lovely legs must have meant to both men and boys in the 40's. But hopefully you are watching the film for another reason, perhaps because it's a damn fine film.

On a gentleman's bet, Frankie Christopher (Victor Mature) decides that he can take a "plain" hash house waitress (Carole Landis) and make her famous in New York's high society.  He's a promoter, and he can make a star out of anyone.   It doesn't hurt that Vicki Lynn is incredibly attractive and in on it.  Unlike most movies where a guy dates a girl on bet, she is actually in on it.  She would love to be famous.

It's a plan that works well.  Frankie gets her to meet all the right people and go to all the right places.  Soon her picture is in the paper and people come calling, including Hollywood.  But before she is able to leave, she turns up dead.

Feeling that he might have not wanted to lose a meal ticket, the police, and especially Detective Ed Cornell (Laird Cregar) place the blame squarely on Frankie's slick shoulders.

At this point, director Bruce Humberstone pulls out his bag of tricks and shows some real skill.  Both Frankie and Vicki's sister Jill Lynn (Betty Grable) are brought in for questioning.  Each of them tells a side of the story, picking up where the other left off, but told separately and in flashback.  It's a good storytelling device and it works well.

What also works is the staging of the interrogations.  Frankie sits in a dark room, barely lit by a small but bright light.  He's very visible, but everything else is in shadows, allowing cinematographer Edward Cronjager to play with the lighting of characters.  Cronjager also uses his impressive skills when shooting the second interrogation room, which appears to be some sort of cage, and casts some great shadows upon the actors.

Don't let me forget the actor.  It's been said that Victor Mature once claimed to have never acted in any of his movies.  I've seen a few, and I believe him.  Other than a sly grin and a pair of expressive eyebrows, he offers very little to the picture.  His performance is likable, but hardly memorable.

Both Grable and Landis do exactly what is needed of them.  Landis has the better role to show off her beauty, and she plays a woman looking for fame rather convincingly.  She's rather charming, and it's easy to see why the men in the film want to help her.  Grable plays the "plain" role, which could be laughable.  She's too attractive, but she downplays her beauty as best as possible and handles her rare dramatic role quite capably.  Her growing interest in Frankie is subtle and it works.

But the real scene stealer of the film is Laird Cregar as the detective who seems a bit too obsessed with finding Vicki's killer.  He's a tall, imposing figure, and the director does a great job of showcasing that by always having him in close proximity to the other characters.  His clothing is always darker than everyone else and he's shot in shadows for most of the film, which I suspect is the directors way of letting us know something isn't quite right with this guy.  The hints are nice, but unnecessary, as Cregar uses his size and voice to alert the audience of his motives and intentions.  He oozes creepiness, and it's obvious, thanks to an earlier and unnecessary shot, he's got a vendetta.

"I don't scare you enough to commit suicide, but I worry you just the same."