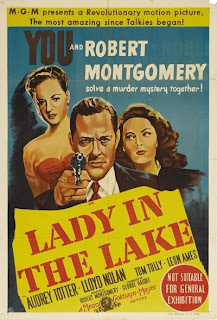 Directed and "starring" Robert Montgomery as Raymond Chandler's Philip Marlowe, Lady in the Lake is definitely a very interesting picture.  Touted as "a startling and daring new method of story telling---a milestone in movie making..." the film certainly delivers.  Could it have been just a gimmick?  Sure, but it works.

Lady in the Lake was filmed almost exclusively from the point of view of Philip Marlowe, with the camera being his, and the viewers eyes.  For you video game junkies out there, it's like a first person shooter game, but for the rest of you, it's a chance to view a case through the eyes of the detective.

From a filming standpoint, it had to have provided some challenges.   The actors had to talk to the camera, which is a bit disconcerting at first, but soon becomes normal.  And clues couldn't be shown in any obvious manner.  They are there, but not easily noticed, which gives the viewer a chance to play at being Marlowe.  A few times I know I wanted to yell "Look to the left" or some other direction.  Frustrating.

So is the film any good?  Yes and no.

Montgomery, rarely seen on camera, does an excellent job with Marlowe's voice.  He does a good job of expressing Marlowe's emotions without the use of his face, a tough task well handled.

As for the story, it's a good old fashioned detective yarn, the type of story you can expect from Raymond Chandler.  Marlowe, on the pretense of having a story he wrote becoming published, meets with a female editor, Adrienne Fromsett (Audrey Totter), who hires him to find Chrystal Kingsby (Ellay Mort), the wife of publisher Derace Kingsby(Leon Ames).  She's been missing for a few months and her husband hardly seems worried.  But Fromsett believes she's run off with a man.  So why does she want Chrystal to be found when her husband couldn't be bothered otherwise?  Marlowe sure she wants to be the new Mrs. Kingsby, and that can't happen with Chrystal still around.  Adrienne is more than happy to point Marlowe in a few directions, and each is met with angry, unhappy people and murder, including the "lady in the lake."

My only complaint is from personal opinion, and not fault of the filmmakers.  I enjoy the lighting of film noirs, the dark shadows and tricks that can be made when using a high contrast light source.  Those are rarely present in this film, which is understandable.  Should Marlowe spend too much time in the dark, as viewers we'd be looking at nothing but a black screen.  So the story is pretty well lit.  Not my favorite style choice, but it suits the needs of the film well.

Montgomery pulled off a pretty neat trick with this story, and that gets him a few extra points with me.