A Month of Noir Day 4 - The Desperate Hours 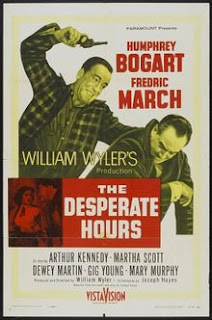 Humphrey Bogart, in his last villainous role, is Glenn Griffen.  Along with his brother Hal (Dewey Martin) and man-boy Kobish (Robert Middleton), the trio have recently escaped from prison and are on the run, hoping to meet up with Glen's girlfriend.  They drive through suburbia, looking for a place to hole up.  Unfortunately for the Hilliard's, it's their house that is chosen.

Over the next few hours, patriarch Daniel Hilliard (Fredric March), is forced to live a father and husbands worst nightmare as his family is constantly threatened.  Daughter Cindy (Mary Murphy) is constantly leered at by Kobish, and spunky son Ralphie (Richard Eyer), also a target of Kobish, actually foils an attempt to throw the criminals out through his own stupid bravery.

With the tensions slowly ratcheting up, and the girlfriend a no show, Glen begins to realize his plan might not go as well as he hoped.  There is a reason the film has the title it does.

Interestingly, this film is actually based on a Broadway play, starring Paul Newman, which itself was based on a book, all three written by Edgar Award winner Joseph Hayes.  I would have liked to see this performed on a stage, because the mostly one house setting must have translated well to the theater.

As for the film itself, what really worked for me was the terrible trio, and specifically their casting and costume design.

By this point in his career, Bogart was already a film legend starring in such films as Angels with Dirty Faces, The Big Sleep, Key Largo, The Treasure of the Sierra Madre, Casablanca, and had won an Academy Award for Sabrina.  As soon as he appears on screen, it's obvious he's the man in charge.  He plays Glen as a smart, but cruel, man.  He's not afraid to frighten and threaten the family when necessary, but smart enough to keep Kobish under wraps.

Dewey Martin didn't have a lot to do with his role, other than get bossed around by his big brother.  But he played Hal as wounded and melancholy, hurt by the fact that he couldn't live the normal life of those whose house he found himself in.  A great scene shows him watching a car full of teens pick up a friend as he watches from a window.  He allows a small smile to escape as quickly as it disappears.  He knows he will never be able to live this way.

And lastly, is the overall wearing man-child, Kobish.  Before he's ever seen on screen he's described as a beast, and although he certainly doesn't appear "that" large, compared to Bogart, he's a giant of a man.  He switches back and forth between the demeanor of a child (his love of playing with toy guns and airplanes) to that of a wounded animal (don't let him drink!) with ease.  It's a creepy and convincing portrayal.

As with most hostage films, it's easy to see the situation isn't going to end well for one of the parties involved, be it the criminals or the family.  Since it was the 50's, it was pretty easy to guess exactly who was going to meet an unfortunate end, but it didn't make the film any less enjoyable.  Unfortunately, Bogart died after only making one more film, The Harder They Fall.  It would have been interesting to see him grow older and hopefully play a few more roles like this one, his mug showing both wisdom and menace, as he aged.

The Desperate Hours was remade in 1990, as Desperate Hours, and despite the talent involved, Michael Cimino, Mickey Rourke, and Anthony Hopkins, I've been told by numerous sources to avoid it.