A Month of Noir Day 8 - He Walked By Night 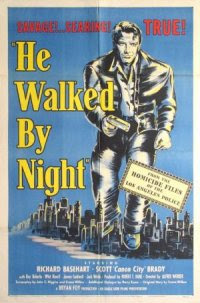 This is a true story
It is known to the Police Department of one of our largest cities as the most difficult homicide case in its experience, principally because of the diabolical cleverness, intelligence and cunning of a completely unknown killer...The record is set down here factually---as it happened.  Only the names are changed---to protect the innocent.

A well dressed man walks down a city street, bathed in darkness, yet still casting a shadowy figure along nearby surfaces.  He stops at an electronic store.  At this time of night, it is, of course, closed, ant that is precisely why he has chosen to stop now.  The man pulls a lockpick kit from his coat pocket and goes to work.  Unfortunately for him, an officer, off duty and on his way home to his wife, drives by.  He pulls his car alongside the man as he attempts to walk away.  When asked for identification, he instead pulls a gun and emptys a few rounds into the officers car.  He attempts to get in a car and drive away, but the officer, in a final heroic act, crashes his car into the getaway vehicle, forcing the murder to escape on foot, leaving behind some guns and a clue, a navy issued radio.

As the detectives arrive on scene, they interview witnesses.  It seems the officer was able to describe the man before he died.  The police begin a dragnet, pulling in everyone on the street that matches a possible description.  It comes up empty.

The criminal, one Roy Morgan, is no ordinary thief.  It seems he steals electronic equipment, improves their design, then sells them on consignment to a local electronics rental company, Reeves electronics.  Mr. Reeves adores Morgan, complimenting his intelligence and offering him a job.  When Morgan refuses, Reeves tells him of a customer who is interested in a television projector that he once mentioned.  Morgan tells him it will be finished tomorrow, which it is.  Reeves brings in the customer, only to find out the projector was stolen from the very man who intended to buy it.  He notifies the police.  At last a solid lead.

Soon a trap is set up, but Morgan is too smart.  He shoots his way out, paralyzing one of the officers, and escapes.  In order to avoid future detection, he changes his MO and starts robbing stores, while changing his apppearance.

A strong aspect of He Walked By Night is the level of investigation the police bring to this case.  Instead of relying on informants or other familiar tropes of the genre, these officers use laboratory work as well.   Enter the most important part of the film, Jack Webb as Lee Whitey, an early form of a CSI lab tech.  Using up to date technologies, Whitey is able to discover what our criminal looks like, and more importantly, that the gun being used in the robberies is the same that shot the officer.

The police begin another dragnet, and soon a local milkman offers them an address that proves correct.  As they attempt to arrest him, Morgan once again escapes, this time into the underground spillways of Los Angeles.  They decend upon him, and in a memorable looking shoot out, they get their man.  Dead.

So why was Jack Webb so important?  It is told that during this movie, Webb struck up a friendship with technical advisor, Detective Sargeant Marty Wynn, and was inspired to create first the radio show, then the television program, DRAGNET.  It's not a hard story to believe, as many aspects of this movie, from the opening title card, the the voice over narration, would become staples of that memorable and groundbreaking show.

It's also of interest that this might have been the first noir film I've seen where the criminal is treated as a mastermind.  He's highly intelligent, cunning and adaptive.  He's aware of police procedures, as is evidenced by him listening in on a scanner, and changes his methods accordingly.  He can pick locks, improve electronics, can handle a gun, disguise himself, and actually perform field surgury on himself once he is shot.  Truly an exceptional criminal.  Yet he is still caught be even better police work.

Even if the film wasn't as good as it was, I still would have enjoyed it thanks to it's incredible title.

Rating: 4 Stars out of 5, with an extra credit star because it helped create DRAGNET.