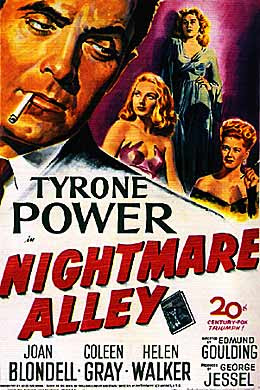 I've been afraid of travelling carnivals since watching the film adaptation of Ray Bradbury's Something Wicked This Way Comes back when I was a small impressionable lad.  While the fear doesn't grip me the same way now as it did then, it still gives me a solid case of the heebie-jeebies the second I see a big tent.

In other words, I was expecting to be a bit freaked out by Nightmare Alley.I'm pleased to say the film, while basing a great deal of the film in the carnival setting, doesn't dwell on it.  Hell, even the horrors of the Geek show are kept off screen.

Stanton, "Stan" Carlisle (Tyrone Power) is a young roustabout, working the carnival circuit as hard as he can.  He talks a good game, and seems to be an integral part of the show, but he wants more.  Fortune teller act Zeena (Joan Blondell) and her husband Pete were once big time, thanks to "a code", but have fallen thanks to his hard drinking.  A few more months, and he might be relegated to the Geek show, the only job available to hard core drunks.

Unfortunately for him, Stan accidentally gives him a bottle of wood alcohol to drink instead of the similarly bottled moonshine.  By morning Pete is dead.  Instead of coming clean, Stan decides to hit Zeena up for "the code."  Together they can run the show and get out of the carnival.  With the help of a very pretty sideshow entertainer Molly, the two get good and become a very popular act.  Molly also becomes very popular with Stan, much to the chagrin of her strongman boyfriend Bruno.

When their love is discovered, Molly (Coleen Gray) and Stan are banished from the circus.  Instead of feeling distraught, Stan sees this as an opportunity.  Molly knows "the code" as well, and soon they are playing ballrooms to the rich in big cities.  They have a good life with good money, and are seemingly happy married.

But Stan can't leave well enough alone.  While his act is popular, a chance encounter with both a psychologist and a grieving father give him a new opportunity.  His ability to cold read people gives him an upper hand, and soon he claims to be communicating with the dead.  Molly is apprehensive, but the psychologist, Lilith (Helen Walker) has inside info that can help him.  She records all her conversations with patients, and that information can give him just the edge he needs to score a huge payday.

Stan now has another lady in his life, but he may have met his match this time.  For once, he doesn't hold all the power.  A score goes wrong, and he is double crossed by Lilith.  Any claim he makes will just be viewed as a psychosis thanks to her professional standing.  He sends Molly away to save her, and is soon wanted by the police.

The film ends with Stan destitute, telling stories to hobos.  He wanders to a fairground to ask for a job, and is only offered the job of Geek, the lowest work.  He takes it without complaint, and begins drinking himself into a stupor.  The film ends with a drunken and crazed Stan being found by Molly.

Despite my irrational fears, I absolutely loved this film.  Tyrone Power gives an incredibly seductive performance.  It's not hard to imagine him bewitching everyone around him, as his ability to read people and "sermonize" them is absolutely convincing.  But his is not the only good performance.  All three of his stepping stones, I mean ladies, are great.  Joan Blondell is convincing as the world weary and wise Zeena, and despite the goofiness of her Tarot card readings, she sells her belief in them.  Coleen Gray is excellent as the young Molly, captivated by Stan's charm.  And lastly, Helen Walker is amazing as Lilith, the psychologist who finally gives Stan what he deserves.  She comes off as naive and willing, but it just hides her motives very well.  When she turns on Stan it's a shock, but not a surprise.  We should have expected it all along.

How can a man fall so far?  Easy.  By reaching too high.