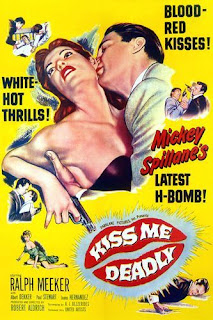 Kiss Me Deadly started with such promise.
A barefoot woman runs breathlessly down a dark highway, barefoot, wearing only a trench coat.  Cars fly past her, despite her best attempts to get them to stop and help.  As a last ditch effort, she stands at the dead center of the road and dares it to hit her.  It swerves to miss her and ends up on the side of the road.

Mike Hammer(Ralph Meeker) isn't pleased.  She gets in the car, and against his better judgement, agrees to give her a ride to the bus station.  Credits roll as Nat King Cole sings "I'd Rather Have the Blues," the woman sobs, and Hammer continues driving.

He didn't want to pick up this woman, but as she states, if she's just been sticking her thumb out, he wouldn't have stopped.  His mood isn't the best, as it rarely is in this film.  Instead of possibly comforting this distressed woman he threatens to throw her off a cliff.  At least he pretended to be her husband when stopped by a police roadblock.  Turns out his passenger escaped from an asylum.

"Get me to that bust stop and you can forget you ever saw me."

Guess what?  They never make it to the bus stop.  A car cuts them off and snatches them.  Christine (Doris Leachman) is tortured by the three assailants while Hammer is out cold.  They are placed back in Hammers car and pushed off a cliff.  He survives, she doesn't.

I'll give Hammer this much, for being such a prick, he at least wants to enact vengeance on Christine's killers.  In this film, Mike is not an honorable man.  He's a PI that specializes in divorce cases, in which he pimps his girlfriend/associate Velda (Maxine Cooper) out to seduce men, then takes pictures.  He's not above turning the same trick himself, and then plays the husband against the wife.  It's despicable, and even worse, he seems to really enjoy it.

I understand completely that Hammer is not a nice guy.  Even in the books he's written as a brutal and misogynistic man, but Meeker really plays up the narcissistic tendencies.  Perhaps it's because he's a bit more handsome then hardboiled, but every girl he meets just wants to make out with him.  And the violence!  Meeker gets this wild look in his eyes every time he slaps a man around.  That's right, he throws more slaps than punches, whether they be an actual bad guy or someone just not helping him fast enough.  There is glee in those eyes, and that's just slimy.

But the bad acting doesn't stop with just him, as this film is full of annoying characters.  I was openly hoping his mechanic Nick (Nick Dennis) would become a casualty, and mystery woman Lily (Gaby Rodgers ) portrayed one of the worst femme fatales of all time.  Her delivery was more wooden than a baseball bat and equally as dull.

At the 45 minute mark, I was dying for this film to be over, and nearly wept when I realized there was still another hour to go.  Thirty minutes could have been excised from this film easily and made it more tolerable.  The only highlight was a second crooning of "I'd Rather Have the Blues" at a nightclub by Madi Comfort as Mike Hammer drank himself into unconsciousness.  At that moment I envied him.

It's said that Mickey Spillaine was not happy with the adaptation by director Robert Aldrich and screenwriter A.I. Bezzerides. I can understand his anger.