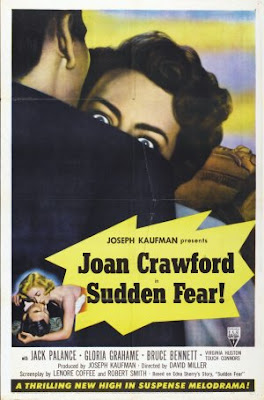 Joan Crawford might just be the best actress I've ever seen, and no further proof is needed after watching Sudden Fear.

Don't believe me?  How about this.  She makes a unlikely romance with Jack Palance seem entirely possible and believable.  The first half of this movie played like a romantic film, and it's because she sells her falling in love with Palance so completely, despite the fact that his facial features remind me of a Dick Tracy villain.  It's not that Jack isn't handsome, he is, in a strange way, but a woman like Crawford wouldn't normally give him the time of day.

Which is exactly why her playwright/financier fires him from her most recent production, he's just not leading man handsome.  Thug?  He can play the hell out of that.  But I've got to give credit to Palance, he does admirable work.

Lester Blaine (Jack Palance) is upset when fired, but when he runs into Myra Hudson (Joan Crawford) on a train from New York to Chicago, the two hit it off, and before long are in love and living in San Francisco.  There aren't many acting jobs in San Fran, but Myra makes more than enough money thanks to her own career and her inheritance from her wealthy deceased father.  It should be enough of a cushy life for Lester, but when his ex-girlfriend Irene (Gloria Grahame) shows up, the trouble starts.  She wants Myra's money and Lester, and together, the two hatch a plan to kill her.

But they probably shouldn't have made the plan in Myra's study, where her dictation recorder was conveniently left on.  Of course she ends up hearing the entire conversation, and in a scene which could teach a master class, she slowly realizes that her husband never loved her and wants her dead.

Time for a plan of her own.

I leave the spoilers off for this part, but believe me when I tell you that the final 30 minutes of this film are some of the most suspenseful, thrilling, and best shot scenes I've ever had the pleasure of watching.  They are that good.  Had the film been a bit tighter in the beginning, this would have easily been a five star movie.