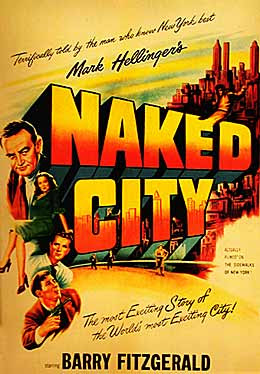 "Every murder turns on a bright hot light, and a lot of people, innocent or not, have to walk out of the shadow to stand investigation."

Late at night a cleaning lady mops the floor of a train station.  A local disc jockey wonders if anyone besides his wife is listening to him prattle over the airwaves at this hour.  A beautiful young woman is strangled by two men and dumped in the bathtub, left for dead.

The city wakes up.  Papers are delivered along with the morning milk.  Another murder is committed.  A drunk man is bludgeoned with a wooden board by a friend and pushed into the river.

More people wake up.  They take care of their children and get ready to go to work, both walking and taking the train.  The city roars to life.

Those murders are discovered.

I shouldn't like The Naked City.  It might have been one of the first groundbreaking police procedural films, but it is still a genre that I quickly grow tired of thanks to endless television repeats of everything from CSI to NCIS.  The actors don't even do a particularly good job of holding my interest.  Everyone is so straight laced, with the exception of the few criminals we meet.  But even they are rather vanilla.

I watch film noir to see the darkest of the dark in a society gone wrong, and the most this film can muster is a few tame murders and some stolen jewels.  That sound is me yawning.

However, The Naked City was one of the first films shot on location in New York City, and for that, you must give it credit.  Director Jules Dassin and Oscar-winning Cinematographer William H. Daniels were smart to make both the city and it's inhabitants major characters in a rather ho-hum story.  I was fascinated by the long shots of sky scrapers and street level views of people just making their way about life.  Each shot is a time capsule of that decade, and honestly, I could hit pause and stare at the excellently framed images for minutes at a time.  Their beauty engaged me more than the plot.

At least until the final shootout.  Filmed on the Williamsburgh Bridge, it was an excellent conclusion to the film.

"There are 8 million stories in the naked city.  This had been one of them."