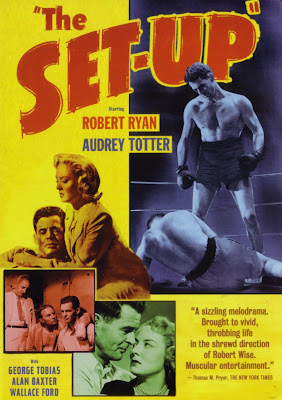 Boxing is all about the money.  Sure, the lightning quick fellows dancing and punching each other into early brain damage might feel otherwise, but for those in the stands, particularly those with sweat soaked betting slips, it's all about the mighty greenback.  Who wins is just as important as how and when they win.  A knockout in the fourth might not pay out as handsomely as a fight that's gone the distance.

And when money is involved, you can place another bet that corruption isn't far behind.

In the ring is a familiar face I've seen a few times this month.  Robert Ryan, quality actor, magnetic, and currently getting beat to a pulp.  He's a mid-thirties palooka (yes!  I get to use that term) named Stoker who might just be washed up.  Very few people believe in him anymore, and his wife begs him to retire.  She's afraid one of these nights he'll come home and not remember who she is anymore.  But she's not the worst.  His own corner men, Tiny and Red, have bet against him.  They tell local tough Little Boy that he'll take a dive towards the end of the fight, a payout that would get Stoker and extra $10.  Or it would if they bothered to tell him about it.

Maybe they should have.  Despite being older and slower than his opponent Tiger Nelson, Stoker believes he can win.  After all, it only takes one well placed punch to end the fight and send him to the top spot, a title shot.  Only problem is he's been that one punch away for most of his career.

Most of the films credit should go to director Robert Wise.  Filmed in real time, Wise stages boxing that I would actually pay to go and watch.  Today, boxing is a nearly forgotten sport (go ahead, name the heavyweight champ) on it's last wobbly legs since the self-destruction of Mike Tyson.  Today it's an over-bloated, glitzy, multi-million dollar hype machine for fights few care about except those parked next to celebrities in the pomp and circumstance casinos.

But in The Set-Up, boxing is a down and dirty affair, for men with lofty dreams and heavy fists.  They'll punch each other for pride, glory, women and money.  The smoke filled venues are sardine packed with men and women smoking and screaming for blood; an early 20th century gladiator arena.  The fight is what matters, not the celebrity seating chart.

Robert Wise was smart to focus this film on the fight itself, plus the culture of boxing.  We don't see training montages set to "Eye of the Tiger" or lofty plans to end the cold war with a knockout.  Stoker's fight is the last on the docket, the fight after the main event.  So we wait with him as he sits in the dingy, crowded locker room, conversing with the other fighters as they wait for their turn.  They are all optimistic or nervous, some return victorious, some without control of their mental facilities, but each makes an impact in their short screen time.  Meanwhile Stokers wife walks the streets nearby, not wanting to attend the fight, and definitely not wanting to think about it.  Will she attend or won't she?  It doesn't matter as much as her anguish, knowing her man is going to take a beating.

When the fight finally arrives, it's well worth it.  The entire four rounds are filmed; no middle round highlight reel with title cards here.  We get every second, every painful punch.  Blood and sweat flow with each punch, and I've got to hand it to Ryan and the guy playing Tiger (Hal Baylor), it looks real.  They are beaten and exhausted, and it's as realistic as most of the fights from Raging Bull.

Will Stoker make it to the end of the fight?  Will he win?  What will happen if he does pull it off?  I'm not going to spoil it for you, but I am willing to place a wager.

And now that I've finished the film, I'm going to start it up again, only this time I'm going to listen to the commentary with Robert Wise and Martin Scorsese.  What are the chances he mentions Raging Bull?

In the meantime, enjoy the montage of pugilistic pummeling.