A Month of Noir Day 2 - Blast of Silence 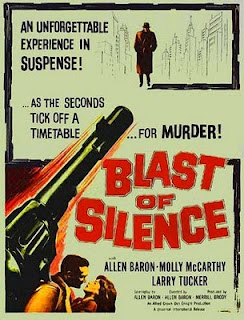 I've read numerous reviews of Blast of Silence, and 90% of the time, all the reviewer can talk about is how this was the death knell for classic noir.   Not that they say this film killed an entire genre, but it might have been one of the last ones made.

Such reviews are unfair.

This film should not be compared to the noir films of the previous two decades, and yes, I have reasons.

Blast of Silence, while fluent in the language of noir, is not a noir film, at least not in my opinion.  Sure, there is the lone killer stalking his prey, surrounded on all sides by unsavory characters, but to focus on these few traits is to ignore everything that makes this film amazing.

To me, this film birthed the films of the seventies that I loved.  Listening to the pulpish narration and watching Frank walk down the streets of New York, I cannot help but think of Taxi Driver or Midnight Cowboy.   As he reaches out and connects with a woman from his past, perhaps for the first time in years, I think of Martin Sheen and Sissy Spacek in Badlands.

And the acting!  Writer/Director/Lead Actor Allen Baron is fantastic as Frank Bono, the hitman charged with taking out Troiano.  He doesn't speak often, so his face does most of the acting.  At times I swear I see flashes of a young DeNiro with those eyebrows of his.

But the man who owns the film is Larry Tucker as Big Ralphie.  What could be a stock character, gun supplier, is brought to a very interesting place thanks to his soft spoken demeanor and rat adoring idiosyncrasies.  It's his involvement that sends the plot spinning out of Frank's control.

Criterion does an excellent job with the DVD.  The picture looks great, the sound, while a bit on the quiet side is clear, and the extras, especially the documentary, are fascinating.

So when you view this film, and you really should, don't think of it as the death of noir.  Consider it an evolution instead.