A Month of Noir Day 24 - Bringing Darkness to Light 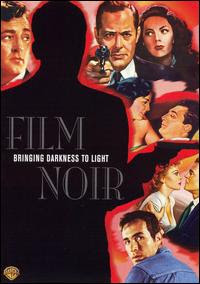 "Here's what film noir is to me.  It's a righteous generically American film movement that went from 1945 to 1958 and exposited one great theme, and that theme is...

You have just met a woman.  You are inches away from the greatest sex of your life, but within six weeks of meeting the woman you will be framed for a crime you didn't commit and you will end up in the gas chamber and as they strap you in and you are about to breathe in the cyanide fumes you will be grateful for the few weeks you had with her and grateful for your own death."      -James Ellroy

I should have made this documentary the first thing I viewed/reviewed this month, but honestly, I forgot I owned it.  This 1:08 documentary was an added bonus to the Film Noir Classic Collection: Volume 3 box set which included gems such as Border Incident, His Kind of Woman, Lady in the Lake, On Dangerous Ground, and The Racket.

Should you ever want a "Cliffs Notes" answer to "What is Film Noir?" then this is the documentary for you.

Will you learn much?  Not if you're already familiar with the genre, but it's still fun to listen to.  And if your spouse or friend has no clue what you talk about when you start obsessing about light and shadow, hand them this disc.  Maybe next time they won't roll their eyes at you and will sit down to watch Out of the Past.

And if you are only mildly familiar with the genre, the disc offers clips from many classic examples such as:
Crime Wave, The Set-Up, His Kind of Woman, On Dangerous Ground, The Maltese Falcon, Murder My Sweet, The Asphalt Jungle, Stranger on the Third Floor, Decoy, Clash by Night, Crossfire, They Live By Night, Born to Kill, Gun Crazy, The Lady in the Lake, Border Incident, Out of the Past, The Big Steal, The Narrow Margin and a couple more.

I must say I was pleased I had chosen a few of these films to watch this month.  Should you be interested in watching this documentary, it's also available separately from Netflix.
Posted by Dan Fleming at 10:28 AM