A Month of Noir Day 17 - Pickup On South Street 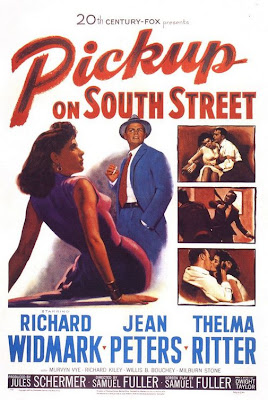 On a crowded New York City subway, two non-descript men are keeping an eye on a lovely young woman.  While under their watch, an unsuspecting pickpocket, Skip McCoy (Richard Widmark), does what he does best.  Little does he know, Candy (Jean Peters), the woman whose purse he just emptied, happened to be couriering a very important piece of microfilm.  This sensitive information was to be delivered to a Soviet Agent, and now both her ex-boyfriend Joey and the cops are after her to retrieve it.  Only problem, Skip isn't going to be that easy to con.  With the help of  neighborhood informer Moe (Thelma Ritter), everyone is after skip.  But when Joey crosses the line, Skip is finally forced to look after someone besides himself for once.

For me, Pickup on South Street is the tale of two characters, Thelma Ritter's Moe and director Samuel Fuller.  This film is excellent, and every character is fully formed and interesting.  Jean Peters's Candy is a wonderful example of a woman caught in a situation that is far above her head.  She constantly struggles, and it's easy to see why she latches onto Widmark's McCoy.  He might be a small potatoes three time loser, but the guy always seems to have a plan.  Widmark carries McCoy as self-confident, despite his many shortcomings.  When he finally takes action at the films end, it is seen as a long time coming.

But the film belongs to Thelma Ritter.  Moe, a whirling dervish of a woman who just happens to be dressed like a young Grannie from the Beverly Hillbillies, is a woman just doing what she can to get by.  She sees herself as an honest citizen, who for the right price will point the cops in directions they can't find themselves.  Despite what others call her, she is not a "stool pigeon" and only takes money because the cost of living keeps going up.  Don't believe her, check the notebook she carries at all times that contains the most up to date cost of food.  It's not her way to ask too much, just what is needed.

Her portrayal, while certainly comical (she sells designer ties for $1), is the most tragic of the film.  From the very beginning we learn she performs her services only so she can afford a decent plot and burial at a cemetery out on Long Island.  Every dollar earned goes towards a fancy gravestone, as her worst fear is being buried unmarked and unmourned at Potter's Field, which is odd because everyone seems to like her.  The police, while not always willing to part with their money, have not problem dealing with her.  Even Skip, whose location she sells out, harbors no ill will, realizing that she's just doing what she needs to get by.  Moe seems destined for tragedy, and her death was not easy to take.  She was strong right to the end though.

Secondly, this film is owned by Samuel Fuller.  He's a masterful director, and every frame of Pickup is wonderfully framed, lit, and shot.  A great deal of credit goes to cinematographer Joe MacDonald, but Fullers fingerprints are all over this film.  Anyone doubting he was the man in charge needs only to watch the special features on the Criterion release.

At nineteen minutes, the documentary/conversation with Fuller is far too brief.  Looking like a white suited Mark Twain from the dark side of town, with his wildman hair and cigar, Fuller talks about the movie business, famed producer Darryl F Zanuck, and what it takes to be a director. (Hint: rehearse, rehearse, shoot)  He is an amazingly entertaining man whose advice on shooting an action scene is priceless, and honestly, should be mandatory for most of today's directors.  They don't make them like him anymore.