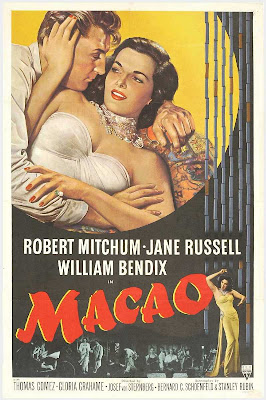 Well, I've down the freak show and the love story this week, I might as well add some musical numbers.

Macao takes place it the titular city, "the Monte Carlo of the Orient," and despite being a good geography student back in the day, I must admit I know little of this interesting place.  Apparently it was a Portuguese colony, but was mostly Chinese.  There was gambling, smuggling, jewels, gold, and the international police had no authority.  Must have been a criminal's wet dream.

So it's a good start when the movie begins with a foot chase through it's city streets and dock area.  There is even some knife throwing.  Too bad it's a cop that got murdered.  Okay, so this isn't the stuff that's in the travel brochures.  Where is the glamor?

Cue the cruise ship, with music, dancing, and Jane Russell.  But don't get too fresh with her!  She throws a mean shoe.  Just ask Bad Boy Bobby Mitchum.  Despite being accidentally hit with her fabulous footware, he still comes to her rescue and manages to secure a kiss for his troubles.  Was the kiss worth his wallet?  Looks like we have a pretty little grifter.

But she's not all badgirl.  She strikes up a conversation with Lawrence C. Trumble, travelling salesman, and gets herself a nice pair of panty hose for her time.  The scene with her putting them on, revealing her garter belt, must have driven the men wild back then.  Certainly made an impression on Nick Cochran (Robert Mitchum).

Next we meet Vincent Halloran (Brad Dexter) an expatriot American running The Quick Reward, a gambling joint/fencing operation.  He runs this town with the help of Lt. Sebastian (Thomas Gomez) and his moll Margie (Gloria Grahame).  Thanks to Cochran's stolen wallet and passport, the police are aware of him, which means so is Halloran.  Not fooled by Cochran's cover story, Halloran believes he is a New York Cop looking into the earlier murder.  When he presents some stolen gems, he is sure of it.  But that's not all they both want.  Julie (Jane Russell) is a singer and soon lands a job at The Quick Reward.  She gets both men's attentions, and desires, and soon the battle is over more than jewelry.

Halloran thinks he's got Cochran under his heal, but is Cochran the man he should be worried about?

While enjoyable, Macao doesn't offer much beyond it's surface charm.  It's an interesting city, with some interesting locations, but beyond the city and docks, we don't see much else.  Jane Russell certainly is pleasant to look at, and her voice is nice, but acting-wise, she offers little more than sass.

Robert Mitchum plays his role with his usual laid back, sleepy eyed cool.  Hardly a stretch for him, as he could have played this character in his sleep.  Even Gloria Grahame is wasted in her far too small role.  Brad Dexter brought some steely eyed charisma to his role though.  With his confidence and vague menace, it's easy to see how he ruled the city.

It's a decent film, but suffers from predictability, even with it's twist reveal about halfway through the film.  I've read that the film was started by Josef von Sternberg and finished by Nicholas Ray.  It's certainly easy to believe, as the film feels like two different movies, with it's glamourous beginning and dark end.  Perhaps if either of them had the film to themself, it would have been stronger, and taken more chances.