A Month of Noir Day 16 - On Dangerous Ground 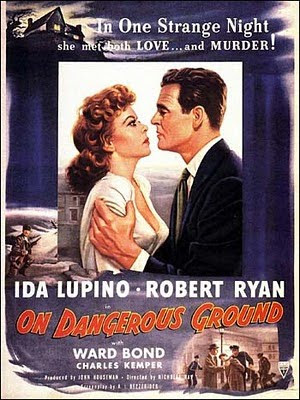 Nicholas Ray's On Dangerous Ground starts out like many of the noirs of its day.  Cops are getting ready for their day, getting dressed, saying goodbye to their wife and/or children, eating a meal, and holstering their weapon.  Soon they are at roll call, being called out.  A Sargent was murdered two weeks ago, and Captain Brawley (Ed Bageley) isn't too happy about it.  Those killers need to be found.

Detective Jim Wilson (Robert Ryan) has a few leads, and with his two partners he pays some visits to his stool pigeons.  From the start, we can see that Wilson isn't your typical cop.  He's sullen and withdrawn, only speaking when he has to quiet someone up.  But he's good at his job.  Soon he's got a location on one of the suspects and when he finds him, he nearly beats the hell out of him.

Despite his success, Brawley has a problem with Wilson's methods.  He's bringing heat down on the department with his constant brutality, and if he can't clean up his act, he's going to be out on his ass.  This isn't exactly a threat for Wilson.  He's fed up with the job, with the people, with the city.  He considers himself nothing more than a garbageman.

"Make your mind up to be a cop, not a gangster with a badge."

As punishment, Brawley sends Wilson up north to "Siberia" to cool off.  A young girl has been murdered, and the small town could use the help of a big city detective.

And this is where the film takes a turn towards uncharted territory.  Removed from the darkness and grime of the city, Wilson finds himself in the stark white and cleanliness of a winter wonderland.  Gone are the shadows, replaced with the brightness of snow.

There is still a murder to solve.  The townsfolk, particularly the grieving father Walter (Ward Bond) want to catch the killer themselves and deliver some good old fashioned vigilante justice.  Wilson doesn't seem to bothered by this but still has a job to do.  Soon enough (perhaps a little too soon) they are onto the killer, and a foot chase/car chase ensues.  As someone from the snowy north can attest, a high speed chase on winter roads does not end well, and both cars crash into the woods, resulting in another chase.

The trail (thanks snow!) leads them to a remote house, where Mary Malden (Ida Lupino) a young blind woman lives with her conveniently out of town brother.  Walter knows she is hiding the killer, and checks out the house while Wilson talks to Mary and warms himself by the fire.  By this point the metaphor is becoming quite clear.

Mary tells Wilson of her brother, and hopes that he will be the one to bring him in alive.  He promises to do that, and after a night spent by the fire with Walter, they will begin looking again.  Of course they find him, resulting in a mountain-side chase and the accidental death of Danny, the guilty brother.  Walter becomes saddened to realize the murderer he's been so blood thirsty for is nothing more than a mentally challenged boy, and takes it upon himself to carry the dead boy back to the cabin.

Wilson, despite his strong feelings for Mary, heads back to the city, still haunted by her voice and words.


Had the film ended at this point, I would have given it a higher rating, as I'm a sucker for downer endings.  Unfortunately he goes back, and the film ends with them kissing.

"Sometimes the people who are never alone are the loneliest."

I guess I'm okay with that.  Robert Ryan does a tremendous job with his character, portraying his emotions with as little words as possible.  And Ida Lupino does a decent job as a blind, but independant woman.  She moves about her house with the use of strategically placed furniture, and her connection with Ryan's Wilson feels authentic, even though they just met.  Despite my cold cold heart, it was nice to see them end up together at the end.