A Month of Noir Day 3 - Crossfire 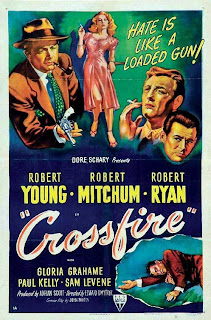 "You still don't know where he is?"
"No.  I didn't know when I came in here, and I haven't suddenly gotten any brighter."

Against a wall, two shadows fight it out, throwing punches only visible for a moment before their tussle knocks over the lamp, filling the screen with darkness.  As the light is turned back on, we see two men struggle to leave the room, while a third lies dead on the floor.  We see no faces.

One woman knows the dead man, and soon a detective is brought in.  He will listen to everyones story, and determine where the blame should be placed.

Every film should have this many Roberts, as the triple threat of Robert Mitchum, Robert Young, and Robert Ryan deliver the goods.  Mitchum, ever reliable, delivers in the role of Keeley, the Sergeant with the quick answers and the desire to see his friend not charged with murder.  Robert Young is Detective Finlay, the man charged with discovering which military man is responsible for the murder of Mr. Samuels.  And last, and best, is Robert Ryan, as Montgomery the heartless bastard with a mean streak.  He was deservedly nominated for an Oscar, one of five that this film received.

And while it's easy to view this film as just another noir, it's important to note that Crossfire was one of the very first films to tackle a taboo social problem.  The book it was based on, The Brick Foxhole by Richard Brooks, originally dealt with homophobia, a subject that wouldn't have passed the censors of the time.  So instead they chose the topical subject of anti-semitism.  The makers of the film felt that audiences wouldn't flock to see a "message" film, so they dressed it up in a murder mystery, and strangely enough, shot it in noir style to save both money and time.  And despite a clunky speech on hate from Detective Finlay, it works.  Mostly thanks to Ryan's portrayal of a man filled with hate.  It's an amazing role, and unfortunately, it would typecast him for years to come.

If you want to see what a prototypical noir film is, this would be an excellent start.