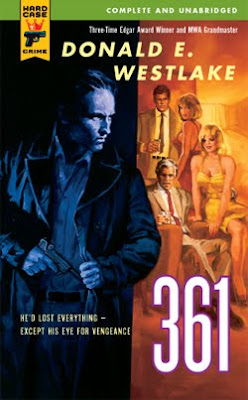 I’ve had some bad weeks. Days where it felt as if the world was raining asparagus-scented piss down on my uncovered head. Nothing was going right, nor would it ever. Absolute dress-yourself-all-in-black-because-you-will-never-be-loved-nor-understood-emo misery.


After reading Donald Westlake’s 361, I realize I, and the rest of your sad miserable lot, need to permanently shut the fuck up and wear our big boy pants. Not one of us has ever had a month worse than Ray Kelly.

How’s that you say?! Howabout you’ve been in Germany for a few years, enduring the military way of life. You get back, see your father for a few days, and while you’re driving home someone pulls up beside you and shoots him in the face, killing him instantly. And oh yeah, he was driving the car. So of course it crashes. That crash leaves you with two broken ankles and one less eye. Your brother comes to see you, and within a few days his wife is killed in a hit and run “accident.”

Could it get worse?

Let’s see. You and your brother decide to enact revenge. There was one clue, a name your father said before the bullet tore through his skull. During some research you discover your boring ass Dad was actually a mob lawyer during Prohibition. He left New York City under threat of death, which would explain why he was so nervous when he picked you up off the bus in...New York City. So there is a good opportunity for some survivor’s guilt right there.

He wasn’t really your Dad. Nope. Turns out your Mother, who is long dead by the way, was a bit of a trollop. And the man you have believed responsible, who you were planning to kill, and just got out of prison after a 25 year stay, is your dear old Dad. And he wants your help in taking over the criminal underworld. Which doesn’t sound like a great idea until...your brother is murdered.

What the hell is left for you to do?

Shed some blood, that’s what. Buckets worth.

I once read a book of stories by a man named Fredric Brown. In one of them he quotes the tale of the peasant walking through the haunted wood, saying to himself I am a good man and have done no wrong. If devils can harm me, than there isn’t any justice, and a voice behind him says, There isn’t.
Posted by Dan Fleming at 11:22 AM