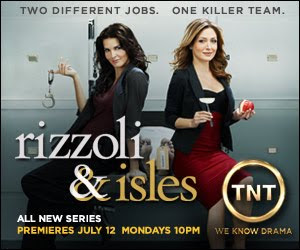 Tonight, after the Season 6 premiere of The Closer, starring Kyra Sedwick's molars, there is another new cop show.  For the record, I believe this to be the 867th new cop show this year, which either shows an immense amount of creativity being spent in a genre I love, or it is the death knell.  There is only so much viewing audience such as myself, and honestly, I'm not even going to try to watch half the shows that are being advertised.  Rookie Blue?  Maybe if you make it to a second season.

But I'll be watching The Closer at work tonight, so I might as well spend the next hour watching their newest addition to the genre, Rizzoli & Isles.

From TNT's Website
RIZZOLI & ISLES follows Boston detective Jane Rizzoli (Harmon) and medical examiner Maura Isles (Sasha Alexander), complete opposites and good friends who solve crimes and bust some of Boston’s most notorious criminals. Growing up at opposite ends of the economic spectrum, the two remain strikingly different from one another in many ways. Jane, the only female detective in Boston’s homicide division, is a tough and gutsy cop who doesn’t let her guard down (except with Maura), dodges her overprotective mother and is better at basketball than her brother. Maura, meanwhile, is usually more comfortable among the dead than the living. She is always impeccably dressed in designer duds with a steady, sometimes icy temperament. And she is working on curbing her tendency to diagnose the people she meets – including her first dates. Jane and Maura often find themselves working together as both use their brilliant minds and expertise to figure out the “who done it” as well as the “how done it” of Boston’s most complex cases.


Despite their many differences, Jane and Maura are best friends, with a quirky and supportive relationship. As Tamaro explains, “That Jane and Maura are so different and yet so effective as a team makes them unusual.… There’s something rare about their relationship that I see in the world but not enough on television: two smart, strong, competent women who instinctively drop the protective shield when they’re with each other.”

Also of note, these characters were created by Tess Gerritsen, in her series of novels. 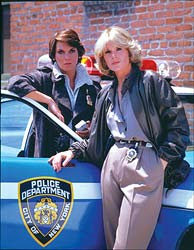 It looks promising, and I'm happy it's got two female leads, something that's almost never seen in anything besides  situation comedies.  Has there been a female cop/buddy show (yes, I realize one of them is an M.E.) since the glory days of Cagney & Lacey?
Rizzoli & Isles premiers tonight on TNT at 10pm Eastern
Posted by Dan Fleming at 11:00 AM