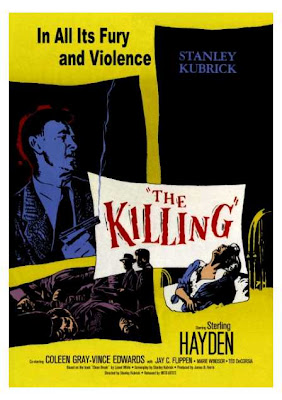 Feeling a little bummed out today because Stanley Kubrick’s The Killing is playing downtown, for free, and I’m going to be stuck working an overnight. I’m going to console myself with the Criterion edition of Jim Jarmusch’s Down By Law, so don’t weep to hard for me. But there is something to be said about watching an old black and white masterpiece outside, and it makes me realize that we are missing two things.

I went to a few as a kid. And while there was not stadium seating (that would be the back seat) or Dolby Digital Sound (that would be the side speaker box), or even edible popcorn, it was always a fantastic event. There is still at least one drive-in theater in Maine, Skowhegan Drive in Theater, but I haven’t made it down in years. The last films I saw at that locale was a double feature of Small Soldiers and Saving Private Ryan. Guess they were planning on the children falling asleep, because I’m pretty sure the Normandy landing would have put a few grizzly images in their young heads.

(Just looked it up, and there are actually FIVE in Maine!)

And while River City Cinema’s outdoor showings of heist films is going to scratch a certain itch, I still feel like something else is missing.

Why are crime films not more popular during the summer months? This summer certainly sees a few of them hitting the big screen, but their box office will always be dwarfed by some special effects juggernaut, a romantic comedy, and the latest children’s film. And while I can stomach Toy Story 3 outgrossing The Girl With the Dragon Tattoo, it pains me to know that The Last Airbender will likely make more money it’s opening day than THWTDT made it’s entire run.

We’ve heard the quality argument before. People go to the movies to be Wowed!, not to necessarily think, and crime films rarely get the adrenaline pumping the way 500 3D blue people attacking helicopters do. But I defy anyone to watch Heat, and not catch themselves holding their breath during the heist scenes.

What will it take to bring crime films to the overwhelming summer masses?

It can’t be star power. Michael Mann, he of the previously mentioned Heat, threw Captain Jack Sparrow and Batman into a gangster flick (Public Enemies), yet it hardly did gangbusters ($97 Million). It was respectable, but opened behind Transformers 2 and Ice Age, and therefore, got thumped. Ridley Scott put Denzel Washington and Russell Crowe in American Gangster ($130 Million), but decided to open it during the Oscar bait season of late fall instead of testing the summer waters.

The only crime film to ever make ridiculous amounts of money was The Dark Knight, and I’d be willing to bet most movie watchers would catagorize it as a comic book movie despite it’s many similarities to Heat.

And I hate to be a box office watcher in this instance. Big grosses obviously does not equate to quality films, but in today’s market, a movie needs to make tons of money to be considered a success. Public Enemies made a respectable sum of money, but it’s budget was $100 Million. Studio executives aren’t going to be so quick to hand out cash money if they don’t see a solid return on their investment.

Which got me thinking again, what are the highest grossing crime films? Thanks to http://www.boxofficemojo.com/, that’s an easy question to answer. Keep in mind, this is their categorization of crime flicks, not mine.

Now that’s a great list of films, but to put it into a very sad perspective, Eclipse, the newest addition to the Twilight series, put about $70 Million into the registers on Wednesday alone. I realize tweeners are as likely to flock to the movies to see a bank heist as they are to wear Team Dillinger and Team Hoover shirts, but I’d like to see at least one crime film become a cultural phenomenon and make some serious money.

I going to make those shirts by the way. I call dibs.

So what will it take? Is someone, and I’m looking at you Tarantino and Scorcese, going to have to put DiCaprio, Tom Cruise, Will Smith, Denzel, Russell Crowe, George Clooney, and Brad Pitt into a movie with Angelina Jolie and Sandra Bullock and have them all rob explosive banks in between high speed transforming car chases while Batman and Wolverine attempt to bring them to justice?

Because I would watch that tonight.  Instead, I'll be watching this.