The Long Con Week 30 - The Grifters 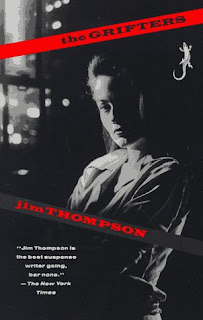 If it wasn't for One Crazy Summer or Better Off Dead, I never would have heard of Jim Thompson.  Have the films of Savage Steve Holland ever brought so much joy?

Allow me to make the connection.  I've always been a movie junkie and a night owl, and when you are 12 years old and have movie channels, that is pretty close to heaven.  And those two films of Savage Steve (who names themself that, he's like the 80's McG!) were always on.  Always.  And I loved them.

They also happened to star an early hero of mine, John Cusack.  He was the lovable, comedic everyman, who always had a strange cast of friends and usually a girl that was way out of his league.  In other words, exactly what I wanted to be.  Once I'd gotten a bit older and seen Say Anything, I knew I wanted to be Lloyd Dobler/Cusack, and the only way to do that would be to watch  every single movie he was in, or at least the ones available on HBO.

One of those was The Grifters.  Starring Mr. Cusack, Angelica Huston, and Annette Benning, and directed by Stephen Frears, it was a film unlike any I had seen John in.  Where was the fun-loving?  The nerdy friends?  At least he still got the girls.  But this was the first film I ever looked at Cusack and saw a grown up.  And for my then 14 year old mind, it was an awakening.  If Lloyd Dobler can be a con man, well, anyone can.  Perhaps this was the start of my cynicism?  Those of you who know me, place blame here.

I was so enchanted by the slick but messy life of Roy Dillan (Cusack) I needed to know more.  I discovered that Frears also directed Dangerous Liasons (oh yeah) but not much else that interested me.  (It would be years before I saw My Beautuiful Laundrette).  But the writers were people I could follow up on.

Never heard of them.

C'mon.  I came from a small town with a very tiny library.  So sadly, and this was pre-internet of course, I had to wait a few years before getting my hands on a novel by either of these fellows.  But when I did...I was amazed.

So again, thanks Savage Steve Holland.  I would be willing to be this is the first time, perhaps ever, that his name has been mentioned three times in a blog.  Perhaps he is like BeetleJuice or Candyman, and now that I've said his name he will appear and make a sequel to One Crazy Summer.

Anyway, I hadn't picked up a Thompson book in a while, and with the film version coming out, I was tempted to reread The Killer Inside Me, but instead, opted for the story that started it all, The Grifters.  I hadn't read it in a decade, nor seen the movie, but what do you know, I still cannot picture anyone other that John Cusack in the role.  And the book, still just as good.

I saw online somewhere that there was some study, buy some people, who theorized that we most fondly remember the things we discover for ourselves at the age of Twelve.  I'm going to put The Grifters on my Netflix Queue, and I don't expect to argue with that point once I'm done.
Posted by Dan Fleming at 11:34 AM