The Long Con Week 27 - Plunder of the Sun 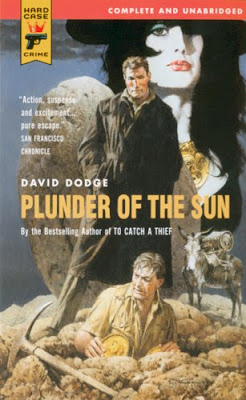 There was a button in the wall near the head of the bed.  I stretched for it with my good hand, knowing how a surgeon feels when he reaches for the knife.  Only there wasn't any anesthetic for the job I intended to do.

A few things always remind me of summer.

1. The music of Van Halen.  Not entirely sure why, but perhaps because it was the favorite band of my friend Pete, and we spent lots of summers together.
2. Creamsicles.  Do you really need a reason.
3. Baseball.  It's what I did every day of every summer until I was 16.
4.  Treasure hunting.

I'm sure that last entry sticks out a little from the rest.  Most of those others, you can attribute to any boy growing up.  But treasure hunting?

Let me clear something up.  I've never really hunted treasure.  The closest I've ever come was when my grandparents brought back a jar of dirt from Alaska that had itty bitty flakes of what could have been gold inside.  But I'd be lying if I said I didn't want to be a treasure hunter.

Just hand me a whip and fedora, and I'll hum you the theme song from Raiders of the Lost Ark.

But I could never be a treasure hunter, and books like David Dodge's Plunder of the Sun is the reason why.  I'm simply not that much of a double crosser.

Al Colby should never had agreed to smuggle the package from Chile to Peru.  Now one man's dead, two beautiful women have betrayed him, and a couple of gunman are hot on his trail.  All because of an ancient Quechua manuscript pointing to the hiding place of a priceless hoard of gold, lost for centuries.

So the race is on - by train, by plane, by motorboat and by mule - first to find the treasure and then to escape with it alive...

A perfect read on a hot summers day, sitting by the pool wishing you were in some impoverished South American country, hip deep in dirt.
Posted by Dan Fleming at 11:00 AM