The Long Con Week 29 - It's A Bitter Little World 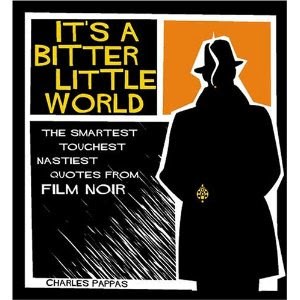 Charles Pappas’s book, It’s a Bitter Litter World, claims to have “the smartest, toughest, nastiest quotes from film noir.” After reading quite a bit of it, I’d have to agree.


This isn’t a book that should be read all at once, although I did just that.  But then I went back and read snippets when I could steal a minute or two.  Take the time to read each quote, think about them, and if you’ve happen to have seen the movie from which it’s taken, give yourself a few seconds to recollect the scene in particular. For me, that was the favorite part. Each quote was like a reminder card, sent from my DVD shelf.

“Hey! Remember me. You haven’t watched me in a while.”

And it was tough not to sit down and watch a handful of movies, but with each quote, a different list of movies would form. Should I watch Double Indemnity, or Kiss Me Deadly? Clay Pigeons or Best Laid Plans?

And that’s the strongest suit of this tiny piece of work. It’s easy to quote the classics, but Pappas gives a rather comprehensive collection, starting with 1941 and going all the way to 2005, when the book was published.

And it’s divided into smart sections:
Chapter One - The Dicks and the Desperate
Chapter Two - The Dames and the Mugs
Chapter Three - The Brutality and the Barbs
Chapter Four - The Money and the Grubbing
Chapter Five - The Life Lessons and the Death Wish

There are also handy dandy lists as well as a thorough Appendix in the back, everything a noir fan needs to plan a MONTH worth of viewing, perhaps for October.

Ace In the Hole (1951)
Lorriane Minosa: I’ve met a lot of hardboiled eggs in my time, but you - you’re twenty minutes.