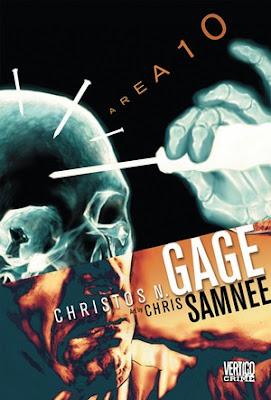 Is it just me, or is the Vertigo Crime imprint getting better with each release?

A killer known as "Henry the Eigth" leaves a trail of decapitated corpses.  There are no apparent clues, except that he keeps the severed heads to use for purposes unknown.

For NYPD Detective Adam Kamen, reeling from a personal tragedy and bitter divorce, cracking the "Henry" case offers a chance to get his life back on track - until a freak incident leaves him with a bizarre injury to the brain.

When he recovers, Adam's perceptions of time are altered.  He soon becomes convinced that his condition is tied to the "Henry" killings  and that the key may lie in the ancient art of "trepanation," the macabre, ritual practice of drilling holes in the skull to achieve enlightenment.  Adam must learn to use his strange symptons to his advantage, in order to stop Henry before he drills again.

This book was the perfect combination of an 70's thriller and an episode of the X-files, and all credit, storywise that is, goes to Law & Order :Special Victims Unit alum Christos Gage.  He characters are compelling and believable, as he gives them solid motivation behind action and inaction alike.  They also have secrets, something I'm always fond of.  The twists and turns are logical, yet still slightly surprising.  I completely guessed the few twists at the end, but I'll say thats because I have read too many damn books, and not because it was telegraphed.

It was also an excellent lesson in trepanation, something I was familiar with, but hoping most people are not.  It's frightening, barbaric, yet seems ever so possible.  It's a great device to build a cult around.  Something to think about.

And not enough can be said about Chris Samnee's art.  He's been kicking around the industry for a few years, gaining a solid reputation as an excellent artist.  It should come as no surprise to those familiar with his work that his character design is perfect.  Each character has their own look, and looks the part they are meant to play.  Not once did anyone look "miscast."  He was also able to properly convey the "visions" that Adam was experiencing in a very disorienting way.  It's no understatement to say that his dark and moody art was perfect for this book.

Area 10, from writer Christos Gage and artist Chris Samnee, might be my favorite so far.  I cannot recommend it enough.
Posted by Dan Fleming at 11:00 AM