Friday Night at the Movies Week 27 - Dragon Tattoo Yet Again 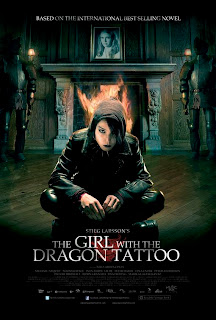 I've reviewed one of the novels of the series, the film, so I might as well review the DVD as well.

Not in the film itself.  The second viewing was just as enjoyable, if not more so.  Noomi Rapace continues to mesmerize in the role.  The subtleties of Michael Nyqvist performance shine through even more brightly.  Usually the second viewing of a good mystery rewards, and this film was no exception.

So why bother writing about it?

Because the DVD sucks.

I didn't expect much, as it's not labelled as a Special, or Ultimate, or even the now meaningless Unrated Edition.  But the special features are about as lackluster as they come, and remind me of the barebones discs that Warner Brothers first shoved out into the market place when DVD's were an oddity, and not the norm.

English language dub track?  It's a foreign film, so that's often standard, especially on movies that were very well reviewed.  I only listen to the dub track if I'm doing something else while watching the film, and often never hear them, but for review purposes I gave this one a listen.  The track was fine.   It's still strange to see the sound not match the mouth movements, but it's no Kung Fu Theater.

Interview with Noomi Rapace?  Okay, this was good.  She speaks fluent English, and surprisingly, doesn't look nearly as intense as her character.  Quite bubbly actually.  She's got some interesting things to say, (big fan of La Femme Nikita and True Romance!) but because it's mostly a fluff piece, it's not terribly revealing or in-depth.  Why couldn't this have been added alongside interviews with other actors?

Vanger Family Tree?  It's just a family tree on the screen.  I could do that by watching the film and having a pen, piece of paper, and tape handy.  That's not a Special Feature!

And lastly, a theatrical trailer for this film and The Girl Who Played With Fire.  Forgive me for cancelling the parade, but even home movies have a trailer nowadays.  But at least there was a trailer for an interesting looking spy film, 0SS 117 Lost in Rio, which had Nazis wearing Luchadore masks, and Mesrine, which I am dying to see, despite how creepy I find Vincent Cassell.

Where is the commentary track?  Niels Arden Oplev must have felt some trepidation adapting this film from the blockbuster novel.  Why didn't he direct the second film?  What about the producers, or the actors, or the cinematographer, or the writers.  You get my point.  Everyone wants to talk about this film, except on the disc.  No shorts, or documentaries.  Nothing.

There very least they could have done was a piece on the author, Steig Larsson.

This was a film that deserved more.  Perhaps there will be a double dip when the trilogy is complete, or the American version hits the screen.  By then I will have purchased all the films, so the odds are good.

Or perhaps James Cameron will put it in 3D and add and extra 8 minutes.
Posted by Dan Fleming at 11:15 AM