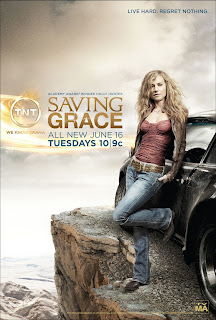 Thank goodness for midseason television premiers and quick turnaround on DVD.  Those of us who wait to watch most of our television shows on disc wait until the glut of August/September, when 2-3 shows are released per week*

But the USA and TNT networks have come to the rescue until the Fall.  Recently released shos include Leverage Season Two, White Collar Season One, and the show I'm finishing off tomorrow, Saving Grace: The Final Season.

I've always enjoyed Saving Grace.  Holly Hunter is an absolute force as Grace Hanadarko.  She's intense, tough, not afraid to take her clothes off, and act like a complete and unlikable idiot at time.  The two Emmy nominations (only two?) are well earned, as Grace is one of the most complex, fucked up cops to ever see the light of day on television.

As an executive producer, along with fifteen or so others, Hunter has been smart to surround herself with a group of talented actors, capable of stealing any episode away from her.  Kenny Johnson (Lem from The Shield!), Bailey Chase, and Gregory Cruz form the group of detectives she spends her days, and nights, with.  Add in Laura San Giacomo as her best friend since childhood, and this collection is what makes the show enjoyable for me.  They tease, they drink, and they play practical jokes (Popcorn!) that Ashton Kutcher only wishes he could pull off.  Most importantly, they have fun and laugh their asses off, something you don't usually get to see on cop shows.

Now, this show does have some Highway to Heaven type moments.  Grace has a "last chance" angel named Earl, who is gloriously played against type by Leon Rippy.  He looks more like a fan having a beer at the Oklahoma football game instead of a messenger from God.  He rarely lectures, just lets Grace do things her way, and provides a friendship that is unique to this show.  But sometimes the "feely good" overwhelms the epidodes.

And that's where the show is slipping for me this year.  It's had it preachy moments in past seasons, but as it gears up for the series finale, the religion is really kicking in.  Not necessarily a bad thing, but it's hitting me over the head a bit too much.  The "Hero Angel Cop" and "wing tattoos" might be jumping the shark.

Also, with only two discs left, the show hasn't relly felt like it's building to a conclusion.  Maybe fewer episodes would have benefitted this season?  Previous seasons were 13 and 14 episodes each, so the 19 this year might have been stretched.

We'll see.  I've been enjoying it nonetheless, and look forward to the conclusion.  Back to disc 4.


*For example, the week of September 7th sees the release of Chuck, Criminal Minds, The Office, Smallville and Supernatural.  Don't expect to see the sunlight that week.


Edit
For those of you wondering, I just finished the series.  This is all I have to say.