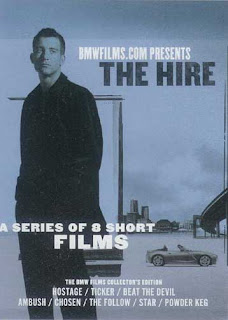 Sure, theses short films are almost ten years old, but I'd almost completely forgotten about them until I started this short film search.  The talent involved in making what was mostly promotional pieces for BMW cars in undeniable.  They must have worked, because according to Wikipedia, BMW sales went up 12% from the previous year.  Here is a list of the films in order.

If you've never seen any of them, you need to.  They were once released on DVD, although I never got one, but with most everything, they can be viewed on YouTube.  Here is the first episode, written by Andrew Kevin Walker (Seven) and starring, as he did in all of them, Clive Owen.