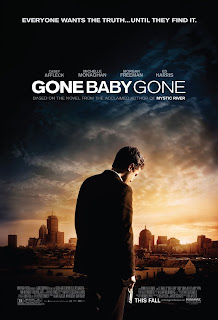 I'm sure you chuckled just as much as I did when Ben Affleck decided he wanted to direct.  At the time, he was more well known for his tabloid fodder (JLo and Gigli) than his acting prowess.  He had started so strong, both writing and starring in Good Will Hunting, as well as good turns in buddy Kevin Smith's films Mallrats and Chasing Amy.  And once summer blockbuster Armageddon made truckloads of money, it seemed that Mr. Square Jaw could only go up.  Then came a whole lot of crap.  No other name to call it.
Go, someone defend the triple feature of Gigli, Paycheck, and Jersey Girl.  As far as I was concerned, he was done for.

Then came Gone Baby Gone.  I wasn't expecting much.  I hadn't yet read the book, and he cast his little brother in the starring role.  There was no logic in this.  It was doomed.

Except I loved the film.  When I'm at a loss for something to watch, which isn't often, that's the movie that goes into the DVD player.  It's enjoyable everytime, with much of the credit going to Affleck for his casting choices.  Turns out little brother is a damn fine actor.

So I started wondering, after a few more small, well received, roles, if this former Hollywood Leading Man would get behind the camera again?

Turns out he is, and it looks just as good.  Once again, he returns to the streets of Boston for The Town, a bank robbing caper that seems to have a bit of a love story mixed in.    But this time he throws himself onto the screen, perhaps because he was dying to work with another excellent cast of actors, including Jon Hamm, Jeremy Renner, and Chris Cooper.  Or maybe he just wanted to get close to Blake Lively.

Either way, I'm happy he's doing another film.  Now I just have to make sure I read Prince of Thieves by Chuck Hogan, the book from which this film is based on.