Friday Night at the Movies Week 30 - The Losers 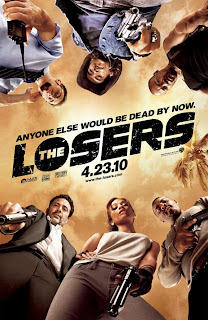 I hate to start of the conversation with money, but almost everytime this film was brought up, so were the dollars and cents.  I'm hardly one to base success on the almighty bank account, but was DC really expecting much more from this movie finance-wise?  It did a respectable sum of  23.5 Million, and that wasn't much less than it's budget of $25.  Of course they wanted it to do big bucks, but even the similiarly themed and much more name recognized A-Team did $75, but that film had a budget of $110.  I think it will do just fine on DVD, hopefully allowing more people to see it.

And has any film with a large release come to video that quickly?  It was less than three months!

Now to the film.  I loved it.  My twelve year old son loved it.  (It's PG-13,  but come on, I want to be the cool Dad.)  The movie was fun, over-the-top, and rather conscious of it.  There were no pretenses of being something more than it was.

Again, what it was, was fun.

From imdb.com
A tale of double cross and revenge, centered upon the members of an elite U.S. Special Forces unit sent into the Bolivian jungle on a search and destroy mission. The team-Clay, Jensen, Roque, Pooch and Cougar -find themselves the target of a lethal betrayal instigated from inside by a powerful enemy known only as Max. Presumed dead, the group makes plans to even the score when they're joined by the mysterious Aisha, a beautiful operative with her own agenda. Working together, they must remain deep undercover while tracking the heavily-guarded Max, a ruthless man bent on embroiling the world in a new high-tech global war.

What made this movie so watchable was the cast.  Starring a Justice League of other Comic Book/Nerdgasm actors, we've got Jeffrey Dean Morgan (Watchmen's Comedian) as team Leader Clay.  He's the grisled, tough leader who also has a way with the ladies.  And one particular lady has a rocket launcher.  She is Zoe Saldana (Star Trek's Uhura and Avatar's Neytiri) as Aisha, the lady with a mysterious past who gives our heroes a second chance at revenge.  With all her seriousness, there needed to be comic relief.  Bring on the always reliable for a laugh, we have Chris Evans (Fantastic Four's Human Torch and the soon to be Captain America) as Jensen, the tech wizard.  And if there is a team leader, there must be at least one guy to challenge him, and that would be great second man Stringer Bell, I mean Idris Elba (The Wire and soon to be Heimdall in Thor).  Rounding out the team we have Columbus Short as Pooch, and Oscar Jenada as Cougar.  How these two got cast without any nerd/street cred is beyond me?  And of course, you need the villain, and in true mustache twirling mode we've got Lost Boy Jason Patrick as the evildoer Max.  He's never been a supervillain, but he's got the chops.  Go ahead, shave his head and call him Luthor.

So once we get beyond the cast, we've actually got a very good adaptation of the DC/Vertigo Comic.  The issues have been chopped down to fit the running time, but the film never feels like it was missing anything.  Thanks to that would probably go to the director, Sylvain White (who honestly hadn't made one film I've seen) and writers Peter Berg (always awesome) and James Vanderbilt (also reliable) who kept the film moving at incredibly quick pace.  And excellent use of Journey in the soundtrack.  Not many films can pull that off.

Room was made for a sequel, which in all likelihood, will never ever get made.  So for those of you wanting more, go pick up the graphic novels.  Well worth it.
Posted by Dan Fleming at 11:00 AM