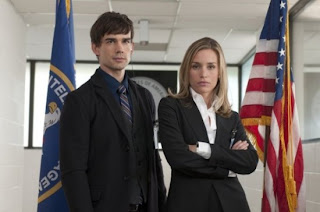 Could this be the show that fills the spy/adventure hole that has been empty since Alias ended?  It's got a solid team behind it (including Doug Liman) and a star as unlikely as Jennifer Garner once was.

New jobs are tough -- especially when your new employer is the CIA. Annie Walker (Piper Perabo) is fluent in six languages, has traveled the world and is besting her fellow CIA trainees in every test. But that doesn't explain why she's suddenly summoned by CIA headquarters to report for active duty as a field operative one month before her training is over. She doesn't know there may be something -- or someone -- from her past that her CIA bosses are really after.

Check out their website, http://www.covertaffairs.usanetwork.com/ , for an exhaustive amount of material.