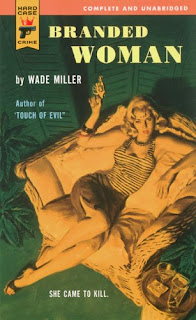 International jewelry smuggling may be a man's business, but beautiful Cay Morgan can hold her own with the best.  Until the day a shadowy rival known only as The Trader has her abducted and scarred for life as a warning to stay out of his way.

Now Cay's on her way to Mazatlan, where one of The Trader's men has been spotted.  There's a big deal going down - but she's not there to make a score.

Just to settle one.

Branded Woman has a few things going for it.  The location is quite exotic, full of characters and places I'll never get to meet.  It's a way of life I'm ignorant of, and am always interested in learning more about.

Does that sound like a bullshit answer?  It is.  Though I usually don't follow the advice of talking Disney bunny rabbits, this might be the time.  If you can't say something nice, don't say anything at all.

Well, The Trader was cool.  For most of the book he's just a name spoken only in whispers and threats, a Keyser Soze for Cay.

Okay, I'm just going to let it fly.  I had a real problem with this book.  Revenge thrillers are usually rife with Toughs with vendetta's, and in 1952, when this book was written, having a woman as the vengeance seeker was probably a brave choice.  The set up is there for her to kick ass and take names.

It could be I've just read so many better, more current books, that I can't put it in historical perspective.  Today, I can read about Lisbeth Salander, or watch The Bride, who are interesting and STRONG characters.

She did not look like a woman planning murder; no one seeing her now would suppose that she could hate so long and so hard.  She suppossed that she could love the same way if she were given a worthy opportunity.  Always her idol had been money, but she loved herself even more.  She had lived through many a reckless enterprise but she had seldom surrendered jurisdiction over her own sleek body.  Promises were cheap; she was not.

This character I could get behind.  However, in a mere 150 pages, when just about every man she encounters either falls in love with her or dies (but not by her hand), we get this...

"Thats what I want," she whispered passionately.  "An end to wandering.  Not that it would be wandering if it was with you.  Home is where the husband is."  She nuzzled her face into the hollow of his shoulder.  "Oh to be able to do this always."

And the guy she is saying that to?  She just met him a few pages ago where he, wait for it, rescued her.  Cay is rescued at least every ten pages by a man, because she is either to weak or soft or just plain stupid to get herself out of the situations she throws herself into.  She is a terrible character whose death I was hoping for before I hit the halfway mark.  She seems more interested in love than revenge, which would have been okay, if the "love" was handled with a bit more believability.  The book takes turns into Harlequin Romance territory far too often for my tastes.

I want revenge.  That means blood.  Not cuddling.

This was the first Hard Case Crime book to completely disappoint me.
Posted by Dan Fleming at 11:14 AM