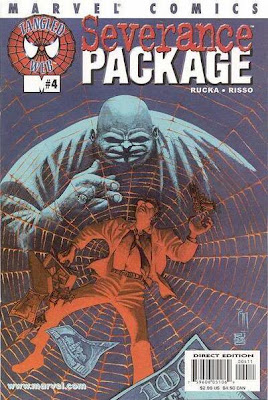 I found myself at a comic convention this past weekend.  It was a small, regional, but excellent, show.  The guest list was small, so unlike the larger conventions, I didn't have to spend my entire day waiting in lines to meet people, which means I got to participate in one of my favorite activities...

I wish I could remember the retailers name, but this guy knew how to clear out his unwanted books.  We're talking 10 issues for $1 boxes, and plenty of them.  Personally, I hit a jackpot, cleaning out his entire stock of Master of Kung Fu issues, netting 60 of them for, you guessed it, $6.

But I'm not here to talk about Shang Chi, for that, I was just bragging.

Instead, I'll talk about what I didn't find, Spider-man's Tangled Web, Issue #4, Severance Package.  And I only mention this, because I found just about every other issue in the bin.

Tangled Web was a series Marvel tried a few years back.  They'd let creators write whatever Spider-man story they wanted.  It didn't have to be in dreaded continuity, and the story length didn't seem to matter.  There were three-parters, one shots, etc.  It was a wonderful series, with stories and art by the likes of Garth Ennis, Brian Azzerello, Paul Pope, Jim Mahfood, Darwyn Cooke, and many others.  So of course, it didn't sell and was cancelled after twenty-something issues.

It did however give us perhaps, with my apologies to Frank Miler, the greatest Kingpin story ever.

Issue #4, Severance Package was written by Greg Rucka and illustrated by Eduardo Risso.  I have enjoyed everything Rucka has ever written, from comics to novels, and Risso is the amazing artist behind every issue of 100 Bullets.  His talent is nearly unmatched when it comes to delievering on mood and characters.  This issue is no exception.

Tom Cochrane works for Wilson Fisk, the Kingpin of Crime.  He had a job go bad thanks to Spider-man, and now it's his job to make amends.   His wife and child might not understand, but he and Wilson, they always had a gentleman's agreement.  If he wants his family to stay safe, he must do one last thing.  Die.

I do not exaggerate when I say this might be one of my favorite single issues of any comic, so much that I went to a grocery store and bought a copy of Spider-man Universe (which reprinted Spider-man stories) just so I could have the issue with a cardstock cover.

Maybe one day Rucka can write another Spidey tale, or better yet, a Kingpin series.  Until then, thanks to the sturdy cover, I can re-read this story for the 100th time.
Posted by Dan Fleming at 12:11 PM