Just some quick notes for today, as I have found myself buried under colorist submissions for my comic work.

- If you happen to be a colorist and are looking for work, check out the site, and see if anything catches your fancy.

- Found 6 of those Dirty Harry novels on Ebay and they arrived yesterday.  Cannot wait to read them, but no way in hell are they all written by Dane Hartman.  Five of the Six were published in 1982.  Sure, only one of them barely tops 200 pages, but it would still be hard to swallow that one guy cranked them out that fast.

- Very pleased to see that Shutter Island continues to be #1 at the box office.  Perhaps this will be the week that I actually make it to the theater to see it myself.

- Some serious shit has been going down in Bangor lately.  Infant murders, drug kidnappings, unsolved hit and runs.  When did we stop being a small city and turn into Thunderdome?

- Just got introduced to this Thomas Kaufman fellow the other day.  He seems like an awfully nice and talented fellow.  He's got a book coming out today.  I'll be picking it up. 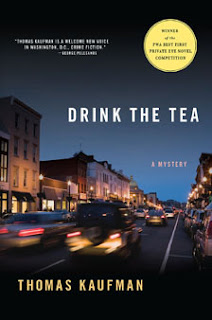 Willis Gidney is a born liar and rip-off artist, an expert at the scam. Growing up without parents or a home, by age twelve Gidney is a successful young man, running his own small empire, until he meets Shadrack Davies. That's Captain Shadrack Davies, of the DC Police. Davies wants to reform Gidney and becomes his foster father. Though he tries not to, Gidney learns a small amount of ethics from Shad - just enough to bother a kid from the streets for the rest of his life.

Now Gidney's a PI, walking those same streets. So it's no surprise that when Gidney's closest friend, jazz saxophonist Steps Jackson, asks him to find Jackson's missing daughter, Gidney is compelled to say yes -- even though she's been missing for 25 years. He finds a woman who may be the girl's mother -- and within hours she is killed by persons unknown. The police accuse Gidney of the murder and throw him in jail.


Maybe Gidney should quit while he's behind. But when his investigation puts him up against a ruthless multi-national corporation, a two-faced congressman, and a young woman desperate to conceal her past, Gidney has no time left for second thoughts. In fact, he may have no time left at all.

You can find out more here.
Posted by Dan Fleming at 10:54 AM