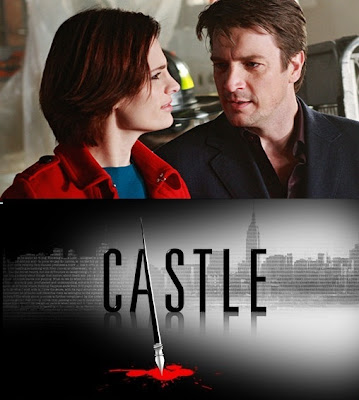 Same sex marriage has been a hot button issue in this country, dividing many people.  And while I do believe that Nathan Fillion is this generation's Harrison Ford, I'm not about to propose to him.  Instead, I want to enter into lifelong nuptials with his newest show, Castle.

This show is my soul mate, combining two of my favorite things in the entire world, writing and crime.  I've had the show on my Netfix for months, with the first season arriving just the other day after the dreaded long wait.  It's only been a few episode, but I'm ready to go ring shopping.

Mr. Fillion is Richard Castle, a sucessful mystery writer who is brought in by the NYPD to offer help in a series of murders copycatting his books.  At first, Detective Kate Beckett is a bit star struck.  She's read and enjoyed his novels.  However, Castle's "charm" soon rubs her a bit the wrong way.  Don't get me wrong, it's the typical "will they or won't they" relationship, but both actors elevate the scenario beyond the typical acting.

While Fillion is pitch perfect, again the whole Harrison Ford thing going on, it's Stana Katic who really suprised me.  I'd never really noticed her before, despite her bit parts in quite a few things I've seen.  But she makes an impression here.  She's well reserved, holding back many of her character's traits until necessary, and easily stands up to Castle's ego.

In many shows where a writer is a main character, we don't really get to see their talent in action.  Castle doesn't repeat that mistake.  The writers give Castle real talent, using his ability to create plots to help solve crimes.  He's allowed to take logic leaps that the detectives just don't commit to.  And from time to time, when Castle narrates his writing to the detectives, it's damn convincing.

Makes me wish Castle was a real writer. And thanks to the all mighty dollar, I can find out for myself.  Richard Castle's Heat Wave is available at bookstores.  Heat Wave stars Castle's newest character Nikki Heat, who is based on Detective Beckett.  Before watching the show, this was an easy "pass."  Post viewing, I've already ordered it from Amazon.