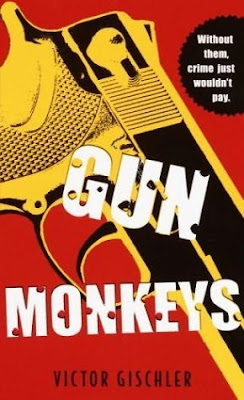 Crime shouldn't be fun, it should be hard work.  If it was, far fewer people would actually commit to it.  But I must admit, there is a certain romance to the whole criminal lifestyle.  You live outside the law, beholden only to you own code of right and wrong, and of course, the man you kick up to.  You get the bad girls, and kick the snot out of the guys they used to hang on.  Days are spent planning capers, drinking, gambling and putting dollar bills into strippers G-strings.  You get yourself high enough up that food chain and live like a king.
Or you can stay a gun monkey.
These are the guys most criminals become.  The hoods, the hired muscle, the angry looking gents who wait at the bar for a phone to ring.  When they get that call, it's usually to do violence.
Such is the life of the Charlie Swift, the entertaining narrator of Victor Gischlers debut novel.  He works for Stan, the local Florida Crimeboss.  Like any good soldier, he does what is asked of him and lives a pretty good life because of it.  That changes when a rival outfit decides to muscle in and move Stan out of the way.  Charlie has a choice, stay with Stan and die, switch teams, or get the hell out of town.  Any choice could actually land him in jail thanks to the mysterious Feds that are suddenly hanging around.
But Charlie has a code.  He's loyal to a fault, and when Stan disappears and the Monkey House burns to the ground, Charlie decides to kill every man that gets in his way until things get set right.
Overall it was a very enjoyable book.  There was plenty of witty banter, gun play, girls, and everything else that makes these types of book so much fun.  Charlie was a very engaging character, with a unique point of view.  But what really struck me though was a theme that ran throughout its pages.
For me, Gun monkeys was all about life in middle management.
I've been there before, though I didn't get to carry a gun.  It's called retail hell for us straights, and while the pay is a little better than your average working stiff, you get much larger shit sandwiches on your plate to force down.  You become the messenger that everyone has been told not to shoot.  Pay raises?  Not getting them this year.  And oh yeah, even though you've been a perfectly good employee, your fired because of some technical bullshit.  Sound like fun?  I left that job. Or in more polite terms, was asked to leave that job.  See, if you question the upper management, they deem you just as replaceable as the drones working for the minimum wage.  They just send someone a tiny bit higher on the ladder to do it.

So I understood Charlie a little bit.  I got why, when his life was coming down all around him, he just wanted to get Stan and have everything return to normal.  He was comfortable being that middle management guy, until the organization was on the verge of new leadership.  He did what he thought was the answer, and the answer was a gun in his hand.
Wish I had that option, although it might have made getting unemployment a little harder.
So instead of leaving a bloody trail, I ended up taking a job where I am the lowest rung on the ladder.  I answer to those above me, knowing that any bad news they have to share stops with me.  Makes life a little more tolerable knowing that if you fuck up, it's only your life your cheating.
Made me happy anyway.  You'll have to read the book to find out about Charlie.  Then you'll be happy.
Victor Gischler can be found on his blog.
Posted by Dan Fleming at 9:57 AM