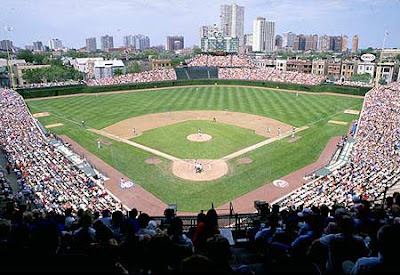 It's early March, the sun is out, and the thermometer is slowly crawling it's way to 50 degrees.  A young man's thoughts turn to just one thing in this time of growth and renewal.

You were expecting something else?  Sorry, but our thoughts are always on that.  But spring training, it's been dreamt about for months.

You can tell a lot about a man by the team he cheers for.  Yankees fan, either he's a born winner, a complete know-nothing, or comes from a long line of Yankee fans.  My grandfather, been a fan since the days of Mantle and Dimaggio.  To him, the game has been broken by free agency, and will even admit that his beloved Bronx Bombers have bought themselves a championship or two.

Me, I'm a Cubs fan.  I'll wait for the laughing to die down.  Got it out of your system?

It's heartbreaking to be on the side of a team that hasn't won a championship since the days of the American Revolution. Each year, spring in particular, offers such hope.  This will be the year.  I've said that at least five times since 1984, and sincerely meant it each time.  And boy we've come close, so very close, only to end up crying into our hats.

Perhaps that's why I such a big fan of crime fiction.  I've gotten used to gettting on the side of the losers, the lost causes, the hopeless.  It's easy to keep reading about some schlub constantly making bad choices when I watched the Cubs give up Greg Maddux,  twice.

The more I think about it, the more the two have in common.  Today, I'm going to bring up some similarities between baseball and Homicide.

1.  Your team is only as strong as the core foundation of the organization.  With baseball, that's the manager, the GM, even the owner.  Homicide started off with Tom Fontana, Paul Attanasio, Barry Levinson, and eventually the author of the book, David Simon.

2.  Stock your roster with some Veteren Leaders.  What would a baseball team be without the grizzled veteren who has faced every pitcher, seen every situation, been interviewed by every journalist.  If you are young and eager, you want the locker next to his.  Homicide had Yaphet Kotto and Ned Beatty, two guys who had been around the block for awhile.  And though Beatty "retired," Kotto stayed on longer than anyone thought he could, delivering with each episode.  In terms of baseball, he would be a player/manager like Pete Rose.  He did write three episodes you know.

3.  Let the superstars do their thing.  If you are buying a ticket, it's to see these guys.  A long ball waiting to happen, a possible no-hitter.  If they are on the field, great things are going to happen.  Is there a person who watched Homicide who wasn't waiting for Andre Braugher to get somebody in the box?

4.  Give the young upstarts their time in the sun.  These guys are not quite rookies, but just finding their purpose within the team dynamics.  They've got the flash and will have the superstar tag in a few years.  Kyle Secor started off a little shaky as Bayliss, but found his feet soon enough.  He was the perfect balance to Pembleton.  Add future director/actor Clarke Johnson to that list as Lewis.

5. Know when and how to replace people.  In baseball, you might ditch that guy who has been a constant .300 hitter, but last year he dropped to .265.  Maybe it was an off year or possibly a decline in skills.  Do you invest more in them, or give someone else a chance?  Homicide lost it's fair share of actors.  Baldwin, Beatty left after Season 3, John Polito after Season 2.  Future seasons would see the departures of Andrea Braugher, Melissa Leo, Isabella Hoffman and countless other lesser roles.  Each time fresh blood was brought on, it worked.  Reed Diamond, John Seda, Michelle Forbes all came on later in the game and performed admirably, becoming valued members of the cast.

6.  Work on your farm system.  You can't always buy the talent you need.  Sometimes you've got to give them some seasoning in the minors.  Tom Fontana was smart about this.  His next show, OZ, was littered with guest stars and bit players from Homicide.  Lee Tergesen, J. K Simmons, Dean Winters, Terry Kinney, Kristin Rohde, and Edie Falco all saw time on the streets of Baltimore.

7. Every once in awhile, you've got to bring in the high priced free agents.  You might not always like it when your team forks over the big bucks to someone who might or might not perform (and I'm looking at you Milton Bradley) but sometimes they are just what the team needs.  In the television world, that's the guest star.  Homicide brought in people such as Robin Williams, Lily Tomlin, Wilford Brimley, James Earle Jones, Marvin Van Peebles.

8.  There is no place like home.  Whether it's the streets of Baltimore or the friendly confines of Wrigley Field, where you play is just as important as who you play.  Sure, in Homicide's Baltimore you might get shot, but in Wrigley they curse you with goats.

I could keep going I'm sure, as there must be a comparison somewhere between Detective Munch and a Knuckleball, but I'm going to find my lucky Cubs hat, think about ordering a jersey, and look at the results of yesterdays games.