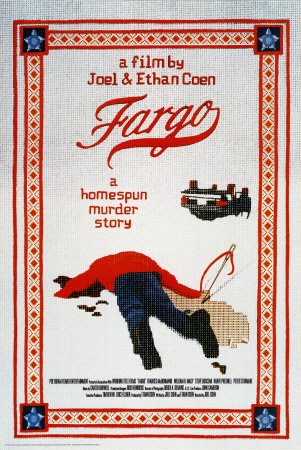 Joel and Ethan Coen have made some amazing crime films.  From the noirish Blood Simple, the sparse and Oscar winning No Country for Old Men, the old style of Millers Crossing, to the strangeness of Raising Arizona and The Big Lebowski, each one has been unique, and in this reviewers opinion, brilliant.  (And yes, I know I'm leaving a few out.  Go to Imdb if you care.)  But it was Fargo that first brought them well deserved mainstream attention.

Jerry Lundegaard (played with perfection by William H. Macy) is a terrible criminal.  He has been swindling money away from the car dealership at which he works, and now that he's got to give it back without anyone noticing, he's at a loss.  His only hope is to have his wife kidnapped so his wealthy father-in-law can pay the ransom. Through a mutual friend, he has Steve Buscemi and Peter Stormare grab her and take her away to a remote cabin until it's time to release her.  He will split the money with them once everything is settled.

Guess how well this plan goes?

Hot on their trail is the most unlikely police woman I've ever had the pleasure of watching.  Marge Gunderson, Oscar winning Frances McDormand, is pregnant.  Very pregnant.  But she's smart than she sounds, and she's onto Jerry Lundegaard.

But the real treat of Fargo was the setting itself.  Instead of the Mean Streets of New York, or the Jaded Hills of Hollywood, this crime story takes place in the snowed in roads of Brainard, Minnesota.  The Coen's make the most of this unique local, often spotlighting the sparseness of the land in long, brilliant shots from cinematographer Roger Deakins.  It's easy to feal Jerry's desperation  as he chisels away the ice from his car's windshield when it's shot from 50 feet above.  Rarely will a man look more lonely.

It's a hard film to categorize.  It's damn funny looking, I mean funny, but it's also dark and full of desperation.  On the flip side, it's also quite charming.  Marge and her loon-painting husband are so cute they practically belong in a Norman Rockwell painting.  But every character is memorable, and odds are the film will stick with you, if only thanks to a well used woodchipper. 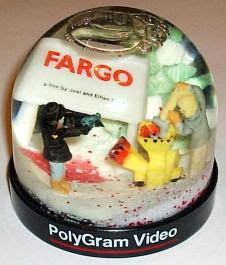