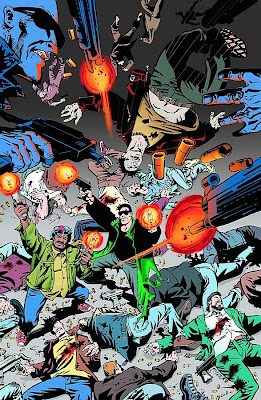 Sometimes, over the top is a good thing.

I'm all for realism.  It's a big reason I enjoy crime fiction as a genre.  Science Fiction and Fantasy are quiet enjoyable as films, but I have a hard time finishing the books.  It took me years to put The Lord of the Rings into the "finished pile."

Crime fiction doesn't use all the imaginary words (with the exception of A Clockwork Orange) or lands of make believe like most fantasy novels do.  I can get behind that.  When the author describes someone getting mugged in a deserted, filthy back alley, I can see that in my head.  I've walked those streets, usually looking over my shoulder with each step.

I've never talked with a dwaf, elf, or tree.  Ask me if I've had coffee with men who have busted skulls open and I can tell you straight up sure. But yet I love comics, a medium chock full of aliens, demons, and men who can fly.

Unfortunately, crime comics are sparse, and most of them are very, very serious.  (Not that there is anything wrong with that.)  However, every so often, a book comes along that combines the best of both worlds, the hard boiled gunplay of crime fiction and the sense of wonder and otherworldliness  that superhero comics offer.

Hitman is that book.

And I'm not sure if "over the top" is enough to describe the absolute lunacy that takes place between its pages.

We've got Tommy Monaghan, a typical Mob hitman from the worst parts of Gotham City, hence the title.  Only in his first appearance, Tommy gets "bitten" by some demon-thing and acquires himself some X-ray eyes.  Pretty cool, but also pretty freaky.  (In an issue of Justice League, he actual applies for membership just so he can get a look at Wonder Woman with thost magic peepers of his.)  He also can hear thoughts.  Again, these would be rather weak powers for a super hero, but Tommy's got no interest in the tights.  He's going to stay a hitman, and actually focus on the more lucrative superhuman contracts.

Over the first few issues we see him fight those demons again, a conjoined twin gangster named Moe and Joe Dubelz (one of which get killed, but the other one still walks around for a while attatched to a corpse) , demons, Zombie aquatic animals and Batman.  He doesn't fight Batman as much as pukes on his shoes.  Best reaction to meeting the Dark Knight ever.

From the previous paragraph, you can probably determine that Hitman never took itself too seriously.  But there were emotional moments that did ring true.  Tommy's friendship with his old war buddy Nat the Hat (Ennis always nails the male bonding) and Tommy's relationship problems always seem grounded in reality, despite the craziness that goes on around him.  He even once gave Superman a hell of a pep talk.

I'd love nothing more than to tell you the entire series is amazing.  Unfortunately, I discovered Hitman near the end of its run.  Instead of purchasing a boat load of back issues, I opted to buy a few of the trade paperbacks that were available.  Only problem with that plan was DC let them go out of print before finishing the series.  That's cold.  However DC has started to reprint the trades, with fanboys hopes high that they might actually get all 60 issues collected before quitting this time.

They damn well better.
Posted by Dan Fleming at 10:01 AM