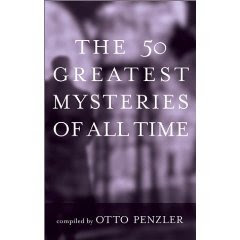 The Bull Moose Music nearby just recently started selling books.  As a former bookstore employee, I would have found this horrifying.  Bull Moose is, and forgive the old guy lingo here, but "in" store for music.  All the cool kids, myself included, by their music and DVD's from their shelves.  It's a small chain store, with great employees, well deserving of my hard earned dollars.  And now they have books.

Not only the newest bestsellers, but also comics (thanks Ian) and...used books.   Cheap used books.  Those who unfortunately work at Borders should be worried.  Myself, and I'm sure a few others, have no reason to shop in their giant box anymore.  (And honestly, the only reason I shopped at Borders once or twice a year was mere convenience of location.)

I will still shop at all the lovely bookstores downtown, but should I find myself mallside with a few sheckles in my pocket, I'm going to Bull Moose.

They just started carrying used books a few weeks ago.  I had yet to go check them out, and as luck would have it, I had $30 in my pocket.  I came out with a $30 graphic novel for $11 (complete Alan Moore WildC.A.T.S) and this little gem.

The 50 Greatest Mysteries of All Time.

This weighty, 565 page tome, was edited by uber-crime-editor Otto Penzler.  It includes stories by classic authors such as Edgar Allan Poe, A.C. Doyle, O. Henry, Ernest Hemingway and A.A. Milne and contemporaries like Stephen King, Lawrence Block,  James Ellroy, Harlan Ellison and Elmore Leonard.  You've got to hand it to an editor who can bring the creators of Sherlock Holmes, Winnie the Pooh, Cujo, and Karen Sisco under one cover.

This treasure trove of words cost me a mere $6.

Guess where the next few Tuesday reviews will be coming from?
Posted by Dan Fleming at 10:57 AM