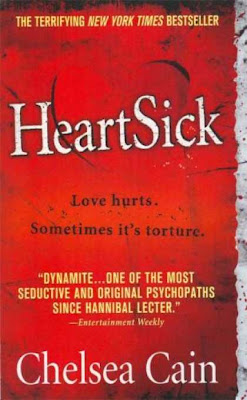 She smiles, satisfied.  "That's why I prepared something special for you, darling."  She has an instrument tray beside her and she turns and withdraws something from it.  A hammer and a nail.  Interesting, he thinks, amazed at his ability to detach himself, to remain clinical.  So far the victims had been seemingly random, male, female, young, old, but the torso damage, though it had evolved, had been notably consistant.  She had never used nails before.

She seemed pleased.  "I thought you'd appreciate some variety."  She lets her fingertips dance up his rib cage intil she finds the rib she is looking for and then she places the point of the nail against his skin and comes down hard with the hammer.  He feels the explosion of his rib breaking and gags again.  His chest burns with pain.  He fights to breathe.  His eyes water.  She wipes a tear from his flushed cheek and caresses his hairm and then she finds another rib and repeats the process.  And another.  When she is done, she has broken six of his ribs.  The nail is wet with blood.  She lets it drop with an innocuous clink back on the instrument tray.  He can't shift his body even a millimeter without searing pain, like none he has ever felt.  His nasal passages have clogged with mucus, he can't breathe through his mouth, he has to brace himself for agony with every lung expansion, and he still can't make himself breathe shallowly, can't slow the panicked, heavy pants that sound like sobs.  Maybe two days was optimistic, he thinks.  Maybe he would just die now.

I would like to think I'm unflapable.  At the very least, I'm one desensitized SOB.

Not so sure anymore, thanks to Chelsea Cain's Heartsick.  The above passage, from very early in the book, gives fair warning to the squeemish.  You are not ready for this.  She certainly seems like a pleasant woman from the author photograph on the back, but then again, she goes through great lengths to show her pretty little serial killer Gretchen Lowell is not just another pretty face.  However, inside her skull is one twisted, deviant woman.  That goes for both of them.

Of course, I find Gretchen facinating.  That's something I have in common with Archie, the facinated man from the opening,  and I hope that's about it.  He hasn't been the same since he was kidnapped, tortured, and yes, killed by Gretchen over the course of ten days.  He was suppossed to catch her, not be her victim.

But he lived.  He should be done with her now that she's in jail, but he hasn't been the same since she called 911, turned herself in, and saved his life.  It's taken him this long to get back to active duty, and that's only with a pharmacy worth of pills to help him make it through the day.  Besides the fruit coctail of meds, he also needs her help.  For every Sunday he visits her, she turns over information that leads to another body.  That's what he tells everyone else, but it's apparent he needs her to feel normal.  But what does she need from him?

It's amazing, in a book with a serial killer and a junkie cop, there is another character just as interesting.  Meet Susan, a tiny, rebellious hair dyed reporter, who for reasons unknown is handed the story of her life.  She's going to shadow Archie around as he attempts to solve another murder spree.   Like everyone else, she's got a few demons of her own.

Chelsea Cain does a remarkable job at handling multiple points of view, allowing us to enter the thoughts of Archie and Susan, but sadly not Gretchen.  It's appropriate, because no one gets in her head, while she is so apt at manipulating everyone else's thoughts.  She's a formidable villian, both smarter and more frightening than that other literary boogyman Hannibel Lector.

Both of her follow-ups, Sweetheart and Evil at Heart are on my bookshelf.  I'm kicking myself for having other books to read first.  But you can bet I'll get to them.
Posted by Dan Fleming at 10:00 AM