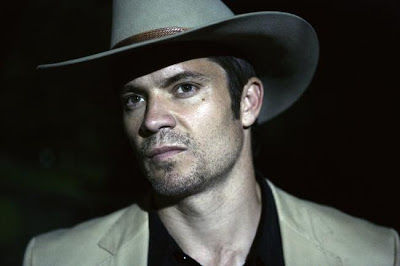 With the exception of Lost, I usually wait for the full season DVD's before watching a show.  I find it more rewarding to watch a 10-20 hour "movie" instead of waiting between each episode.  Once in a while, a show will come along and tempt me to tune in to the first hour.  Sons of Anarchy, Breaking Bad, and a few others have all gotten me within a simple button push of watching the first episode, but my Green Lantern-like willpower has helped me resist getting hooked on most weekly crack.  (Again, Lost is the exception.  Nothing short of nuclear holocaust will keep me from the island every 7 days.)

Justified is based on the novella Fire in the Hole by Elmore Leonard (one hook), and stars Timothy Olyphant (second hook) and Walter Goggins (big third hook).  That's all I need to know. Goggins was one of my favorite characters on The Shield, and despite his lackluster movie career, I've always liked Olyphant because of Deadwood.

It doesn't hurt that the producers of this show have been behind (unfortunately) some one year wonders such as Boomtown, Kidnapped, Robbery Homicide Division, and the other Leonard TV project Karen Sisco, which I unfortunately never got to see.  (Might have to troll the internet for episodes of that, stupid lack of DVD release.)

But the thought of Olyphant as a U.S. Marshall and Goggins as his Redneck Nemesis might be too hard to resist.  Justified premiers tomorrow, Tuesday March 16th, at 10pm on FX.