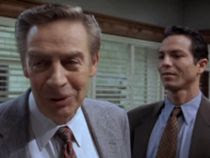 It's no secret I'm a comic book fan, so the thought of characters crossing over from one story to the next is not a great leap for my simple mind to make.  In comics such a wonderful event is called a crossover.  In television land, it's called "please bring our ratings up!"  I can only assume that was the case with the great Law & Order/Homicide Crossover event.

At the time, Law & Order was an absolute ratings juggernaut.  Everyone loved it.  Personally, I thought the show was okay, borderline boring.  I adore Jerry Orbach, and despite what Patrick Swayze said, he can put anyone he damn well pleases in a corner, Baby included.  But other than him, the original cast of L&O left me cold.  It's not their fault.  The show wasn't about them.   The police procedures and the cases were the stars of the show.  How many times can Orbach ask a witness to describe a perp and not get bored?

We all know my feelings about Homicide.  It's my crack.  I'd watch a show where they crossed over with The View if I had to.

So did the experiment work?

It worked about half the time. 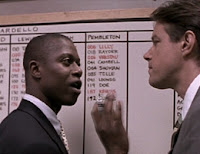 It was nice to see Bayliss and Frank in NYC, walking unfamiliar streets.  And watching Frank ruffle a few NYPD feathers was worth the 45 minutes I invested in the episode.  But even with their charisma injection, the episode left me as cold as expected.

When they got back to Charm city, it turned for the better.  Suddenly, Orbach's Detective Lennie Briscoe had slept with Munch's ex-wife, adding immesurable depth to his character.  It would also build a bond between them when Munch transferred to Law & Order at the end of Homicide's run.

The  other highlight was J K Simmons portrayl of Col. Alexander Rausch, a white supremicist and mastermind behind the episodes murder.  I'd be will to bet all the change in my pocket this performance got him cast as Vern Schillinger on OZ.  (It's no coincidence that Tom Fontana went on to create OZ.)  They must of liked him enough, because Simmons would return to Law & Order as Dr. Emil Skoda.

So was the experiment a success?  I'd say yes.  It was worth it to see L&A's actors cut loose with some interesting scenes, and I'm sure Homicide saw a ratings boost as a result of the crossover.  Had it not been a success, I'm sure they wouldn't have repeated the stunt two more times.

Homicide still kicks Law & Order's ass with ease, and it's a shame only one of them got twenty-seven spin offs.  At least Munch lives on.
Posted by Dan Fleming at 11:00 AM