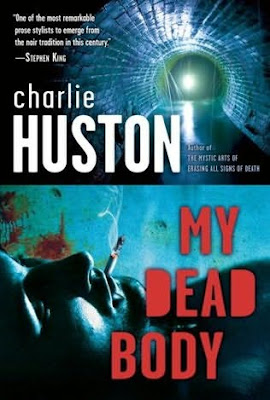 I was beginning to really hate vampires.

Of late, they have become sparkling, dreamy eyed, messy haired, well...pussies.  I'm sorry, but the blood suckers I've come to know and love do not behave the way a certain series of books believes they do.  Even a vampire as prissy as Lestat would rip the throat out of these high school Teen Beat pinups.
Me, I like my vampires mean.  I would think that having your blood drained and being told you'd live forever in the dark (yeah, fuck your sunlight sparkles) would make one a bit jaded.  If all vampires behaved like Lee Marvin, the fiction world would be a better place.
Enter Charlie Huston and his Joe Pitt casebooks.  This guy knows how to write a vampire tale I can get behind.  I recently read the last book in the series, My Dead Body, and I'm sad to see it end.
From the beginning.
Joe Pitt is a vampyre. (Yes, it's spelled that way, get used to it.)  He's okay with that fact.  In life, he was kind of a loser, and having an extra long life sure beats giving handjobs in the bathroom of CBGB's.  Once "reborn" he sided with a group of vampyres called The Society, which can be best described as an activist clan of vamps.  Oh yeah, in this world, Manhatten is divided up into clans, each with their own agenda.  The aforementioned Society wants eventual Vampyre integration.  (Vampyres are not exactly public.)  Their main competition for the hearts and souls of the blood sucking community are The Coalition, a group that's almost corporate in their behavior.  They are more than happy with the secret, but powerful lives they live.  The other smaller factions include the biker gang The Dusters, the Hood, who make their territory north of 110th street, and the very mysterious Enclave
Each book finds Joe pissing off one or more of the factions while doing a job for someone else.  Joe, once Society, is done playing by everyone's rules.  He just wants to live his own life, and maybe settle down with his girlfriend Evie.  But like every good noir tale, nothing ever goes as planned.
I can say I enjoyed every one of the books from start to finish.  The dialogue, though difficult to become accustomed to without the use of quotations, is always snappy and quite often, more bitter than black coffee.  The plots are fast paced, quickly putting Joe through as many hells as possible.
Most importantly, the series knew how come to a satisfying end.  There, that gives you something to look forward to as you start the first book.
In case you were wondering, The Joe Pitt Casebooks are:
Already Dead
No Dominion
Half the Blood of Brooklyn
Every Last Drop
My Dead Body
Along with those books, Charlie Huston has also written the Henry Thompson trilogy, which are soon on my list, The Shotgun Rule, and the recently Edgar-nominated The Mystic Arts of Erasing All Signs of Death.
His webiste is PulpNoir.com.