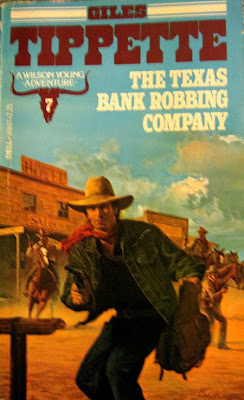 This was originally written for the website I linked to last week.  I reprint it here with some added, humorous, content.

I'm slowly coming to the realization that I have been behaving like a literary snob when it comes to crime fiction. Tough talking private investigators have long been my preferred choice, with recurring characters such as Lawrence Block's Matthew Scudder and Dennis Lehane's Patrick Kenzie being my favorites. I've followed their exploits for years, relishing the fact they lived slightly outside the law. While their feet are firmly planted on the side of good, many of their cohorts are less reputable, but always fun.

Over the past three months I've been seriously studying all forms of crime fiction, and more importantly, opening myself up to authors and genres I would have previously ignored. I've been missing some good stuff.

Tough talk is tough talk, whether it comes from a cynical P.I., a street corner hustler, or a horse riding bandit.

Today's forgotten book is a bit of a misnomer, as I could hardly forget something I'd never heard of. Instead, I forgot an entire genre. Make no mistake, I'm aware of the Western genre. I've heard the name Louis L'Amour, watched The Man With No Name shoot down banditos, and despite learning about it many years ago, I've never failed to remember the Alamo. But I've never believed Westerns belonged on my beloved crime bookshelf along my Hard Case Crime series. (And yes, I've got a bookshelf dedicated to crime fiction, and yes, it's beautiful.) Horses and six shooters just didn't compare to the mean streets of a decaying city despite the commonality I failed to recognize.

The segregation ends today, thanks to the talent of Giles Tippette and his book The Texas Bank Robbing Company.

So I was in jail. What I had feared all my outlaw life had finally come to pass.


I just starred at the floor of my cell and made believe that it was not going to be long before I was a free man again. After all, I was tough. I'd been born tough, raised tough, and I'd stayed tough.


Goddammit, I was Wilson Young and I was a long way from beaten.

This book had everything a fan of criminal behavior could ask for.

We've got Wilson Young, the leader of the aforementioned bank robbing company. He's young(ish), handsome(ish), a hell of a planner, and though we don't really get to see him in action much, a gunslinger without match. He's loyal to his men, and they gladly follow him to hell and back, or at least Mexico.

He lives by the outlaw code, robbing only those who can afford it, kills only those who need killing, and even wins the hand of the mythical "hooker with a heart of gold."

The book begins with Young and his gang headed toward the Mexican border towns of Laredo and Nuevo Laredo. Wilson's lady friend is meeting them there, and he's got plans to take her to Mexico because she's never been. He's in love, and the outlaw ways are on the backburner while he woos his woman. That doesn't sit to kindly with his partners Chulo and Wilcey. They are ready for activity, mostly because love has bitten Wilcey on the ass, and the last thing he wants to do is watch Young and Marianne make eyes at one another. But a border town is a border town, and there will be gambling and prostitutes to occupy their time.

While there, Wilson runs into an old acquaintance, and ladies man, Austin Davis. Suddenly, he's not so secure around Marianne, and decides that hanging around town won't be the best idea as long as Austin is around the threaten his security. A heist must be planned, and what a heist it is. My only regret with this novel is we never get to see the riverboat caper in action. I've got no idea how one would even rob a riverboat, but Wilson Young's got it all planned, and honestly, it sounds like it would have worked. It would have been that "one last job" that criminals are always talking about.

We don't see it in action because around page 100 Wilson goes and gets himself arrested. Why? Because, like many a criminal, he doesn't believe he's going to get caught. He's lounging around, drinking his drink, when the town sheriff walks up behind him and puts a shotgun to his head. Hardly the blaze of glory one comes to expect.

I'll stop with the synopsis now because I really don't want to spoil the rest of the book. I owe it to those who have never read the book to leave the remainder a mystery. Stop the protesting, I assure you it doesn't disappoint. Besides, my paraphrasing hardly does the prose justice. It's sparse, well written, and endlessly readable. The 250 pages zipped right along.

Mostly, I enjoyed this book because it subverted every expectation I had about the Western. I was waiting for lots of gunplay, not incarcerated character study. The "Great Bank Robbery" was unplanned and over within minutes, with minimal bloodshed and bullets fired. Nothing tense about that. Hell, they barely even rode horses. However, this is a series, with this being the seventh, so those exploits might exist in past or future volumes. I'm going to search for them and find out for myself. You should as well.

My thanks to Allen Appel (http://thethrillerguy.blogspot.com) who originally suggested, and provided, this book when I declared my apathy for Westerns. He seems a rather smart man, and I'll admit, he was right. I'll be taking his advice as often as he offers it.

Giles Tippette, a Texan by birth and by choice, is fast, wild, and prolific writer of stories and books.  Along the way to attaining the hard-won status of full-time author, he rode the rodeo professionally for several years, owned a gold mine in Mexico, was involved in a diamond mind operation in Venezuela, traveled as a diamond courier, produced shows, tracked hijacked yachts in the Caribbean, and  flew as a mercenary pilot in South Africa.

From Allen's anecdotes, and the authors own bio, all I can think of when I picture Giles Tippette is this man, and I mean it with utmost respect.