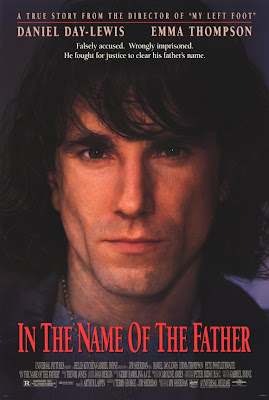 Far too often it's easy to forget that not all in jail are actual criminals.  Sometimes the wrong man does get arrested.  At least once a month a story enters the news cycle of a man who has sat in prison for years, even decades, only to be cleared of all charges.  I don't know about you, but I'd me mad as hell, and most definitely look to Hollywood to sell my story.
Two of the greatest actors in recent memory have undertaken the task of playing someone who was unjustly  imprisoned.  And when it comes to Oscar bait, playing a wrongly imprisoned man is good shortcut to take to the ceremony. I was tempted to spotlight Denzel Washington, who lost a statue that was rightfully his for Hurricane, only to win in a few years later for his role as a crooked cop in Training Day.  Both films had merit, Training Day's merit being mostly Denzel and Ethan Hawkes performance, but I opted to go with In the Name of the Father, solely because it stars the man I consider to be the greatest actor period, Daniel Day Lewis.  He has won two best actor trophies, been nominated for a couple more, but his turn in this film was absolutely amazing and made me a fan for life.
Daniel Day Lewis stars as Gerry Conlon, a petty thief, who after being nearly hobbled by the IRA, escapes to London at his father's Giuseppe (Pete Postlethwaite) urging.  Once there, he falls in with some hippies (it's 1975) and spends his days in a drug/sex stupor.  Unfortunately for his free love, a few bombs targeting cops explode in nearby pubs.  Being an Irishman in London, Gerry and his friends get the blame.  Subjected to 7 days worth of beatings and mind-fuckery, Gerry confesses.  From there, the police round up his family in London, along with his father, who had come to get Gerry a lawyer.  Soon, they are all found guilty and sent to prison.
Once in prison, the real story begins.  Gerry shares a cell with his father, a man he has always had issues with.  With only time and each other, they slowly start to bond, at least until the man really responsible for the bombings comes to their fine prison.  Unlike his father, Gerry sees Joe McAndrew (Don Baker) as a man of strength, especially once he stands up to the head Englishman in jail.  (Interesting sidenote, Don Baker was making his acting debut in this film.  He is a well known harmonica player, and spent much of his youth in and out of prisons.)
So while Giuseppe labors along, working on appeals and "the cause" (their freedom), Gerry bonds with Joe, becoming a bit more hard.  He doesn't act up the role, mostly playing his hardness through his eyes.  That "thousand yard stare" becomes as apparent as his swagger.  His admiration for Joe only grows when he stages a riot, meant to gain publicity for Gerry and Giuseppe's cause.
That all changes when Joe burns a prison guard alive.
Gerry begins to realize he is not the man is has been trying so hard to become.  He reconnects once again with his "Da," and the scenes between the two are really quite touching.  You see a man slowly grow to understand, respect, and love the father he's rebelled against his entire life.
So why the hell am I talking about this film?  It's not really a crime film, as no crimes other than robbing a hooker are actually committed.  It has scenes in prison, but it's not exactly OZ.
I'm not really sure if I even consider it a crime film, but I do find it an interesting study in what can happen to people when they are labelled criminals.  Upon conviction, the judge himself says he'd have no problem hanging Gerry if he could, despite the fact the evidence of his guilt was circumstantial and weak.  Once in prison, he is hated for simply being Irish.  I believe if his father had not gone to prison with him, Gerry would have become a hardened felon, and lost his sense of humanity.  He is brought back from the brink by his father's love, and once his father dies, takes up the cause with renewed vigor.
I have not even mentioned the other stellar acting in this film, that of Emma Thompson, as their lawyer Gareth Peirce.  It's her dedication that eventually wins their freedom, and her courtroom outburst still gives me the goosebumps.
In the Name of the Father was nominated for seven Oscars, winning none.
Best Actor - Daniel Day-Lewis
Best Supporting Actor - Pete Postlethwaite
Best Supporting Actress - Emma Thompson
Best Director - Jim Sheridan
Best Film Editing - Gerry Hambling
Best Adapted Screenplay - Jim Sheridan and Terry George
Best Picture

And now for a recommendation.  Daniel Day-Lewis and director Jim Sheridan re-teamed again in 1997 for The Boxer.  Again, DD-L plays an imprisoned man, only this time the movie picks up after his release.  I could have just as easily discussed this film today, and honestly, it's my favorite of the two films.  Unfortunately, the Academy ignored it completely.  For those of you who claim that DD-L only knows how to overact, watch this film and be proven wrong.