Winter's Bone up for a ton of Independent Spirit Awards 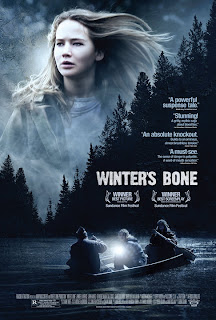 It should come as no surprise to those who have seen the film, but Debra Granik's film Winter's Bone is up for numerous Independent Spirit Awards.  Nominee's include:

Another reason to see the film is the excellent music by Dickon Hinchliffe. Hopefully this award season will see a few wins and especially an Oscar nomination or two. The Academy Awards don't mean a whole lot to me, but the extra exposure they bring would be nice for this gem of a film.  My brief review can be found here.

Winter's Bone is based on the novel written by Daniel Woodrell..  I read the first ten pages last night, and it's oh so good.
Posted by Dan Fleming at 7:13 PM